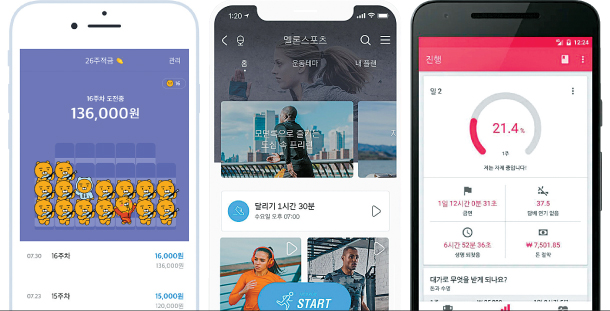 People who struggle to keep New Year’s resolutions have a new type of help: mobile applications that help users follow through on their best intentions.

Along with a feature called Auto Play, which streams songs suited to the user’s running pace, the service also offers music playlists suited for 10 types of fitness activities, such as Crossfit training, weight lifting, cycling, boxing and yoga.

Melon Sports also has basic fitness tracking services recording activity speed, time and calorie usage. Users can set their own individual goals, such as how many pounds they want to lose, and the app will come up with a fitness schedule.

For those who don’t like exercising outside in the cold, the Kakao Mini smart speaker provides a home training feature. Users can tell the speaker the exercise drill they desire - for example, “Three sets of 20 reps” - and the smart speaker automatically sets a timer and shouts out exercise commands like a personal trainer would.

Smokers trying to kick the habit can choose from a variety of apps designed to help. Quit Tracker: Stop Smoking, by despDev, has been downloaded over one million times as of Dec. 25 from the Android Play store.

The app is good at positive reinforcement. It tells users how long they have not smoked, how much money they have saved and how their lifespan is likely to have been increased by not smoking.

On a less positive note, users can also see how much their lifespan was reduced by their smoking or how much they spent on the habit. The app’s diary feature allows users to record their progress in quitting the habit and how it feels.

One online service has been designed for penny pinchers looking to save small amounts of money. Kakao Bank’s 26-week installment savings service tries to motivate users by encouraging them to save a small amount, which it increases every week.

The penny-pinching service, which was introduced last June, has been used by more than 600,000 accounts as of Dec. 25.

Kakao Bank added some fun to the savings plan by allowing users to share their progress on social media.