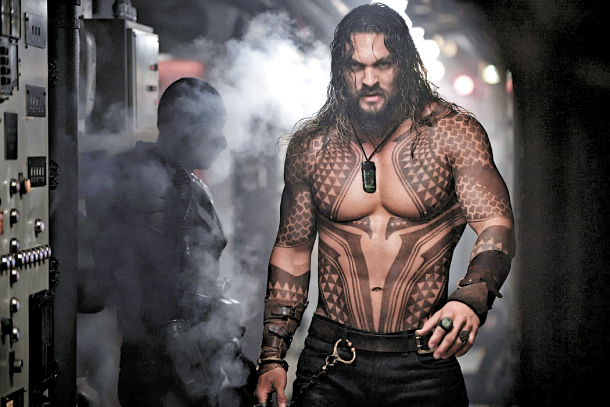 “Aquaman,” which tells the tales of the DC Comics superhero, stayed atop Korea’s weekend box office in its second weekend, outperforming local releases like “Take Point” and “The Drug King.” [WARNER BROS. KOREA]

DC Comics’ “Aquaman” topped Korea’s weekend box office for the second weekend straight, staying strong amid year-end offerings like “Take Point” and “Bumblebee,” which came in at second and third in their debut weekend. “The Drug King,” which was seen as a strong competitor to the underwater superhero title, slid down to the seventh spot, even lower than “Bohemian Rhapsody,” which has been in theaters for two months.

From Friday to Sunday, the Jason Momoa-starring “Aquaman” sold 821,000 admissions at 1,168 screens, accounting for 30.3 percent of the weekend’s entire ticket sales revenue. According to the data provided by the Korean Film Council on Monday, the newest release from the DC Extended Universe has sold more than 3.2 million tickets since its release on Dec. 19. In two weeks, it outperformed “Wonder Woman,” DC Comics’ previous release, which sold 2.16 million tickets in Korea last year.

Co-starring Amber Heard as Princess Mera and Nicole Kidman as Aquaman’s mother, Queen Atlanna, the James Wan-directed feature centers on Aquaman as he decides to confront and fight his half-brother Orm (Patrick Wilson), the current king of the underwater kingdom of Atlantis, who wants to wage war against the world above the water.

Coming in at second was “Take Point.” Starring Ha Jung-woo, the action title sold 642,000 admissions at 1,081 screens over the three days. Since it dropped in theaters on Wednesday, the action-packed feature has sold more than a million tickets.

Co-starring Lee Sun-kyun, the movie revolves around a mercenary force led by Ahab (Ha) on a covert CIA operation to apprehend a high-profile North Korean official at an underground bunker located 30 meters (98 feet) beneath the surface of the demilitarized zone. Lee plays an elite North Korean doctor who happens to enter the bunker.

Despite the film being highly anticipated, it received mixed reviews from viewers. Many complained on the portal site Naver’s film rating system, arguing that the movie was excessively friendly towards North Korea and that it had a weak plot, while others complained that the film’s first-person perspective made them feel dizzy.

Rounding out the top three was “Bumblebee.” A prequel to 2007’s “Transformers,” the film sold 370,000 tickets at 843 screens over the weekend, bringing its total ticket sales to 1.05 million.

The sixth installment in the live-action “Transformers” film series, the movie, set in 1987, is about the origins of the yellow Autobot and the close friendship it makes with a teenage girl named Charlie Watson, played by Hailee Steinfeld.

In its ninth weekend, “Bohemian Rhapsody,” about British rock band Queen and its lead singer Freddie Mercury, managed to come in at fourth. 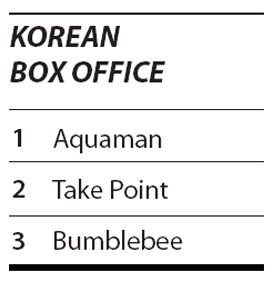 More people chose to check out the movie sensation than recent star-studded releases like the dance movie “Swing Kids,” which tells the story of a rebellious North Korean soldier (Do Kyung-soo) who falls in love with tap dance during the Korean War (1950-53), and “The Drug King,” which revolves around a petty smuggler (Song Kang-ho) who ultimately builds an underground criminal empire, becoming a drug kingpin.