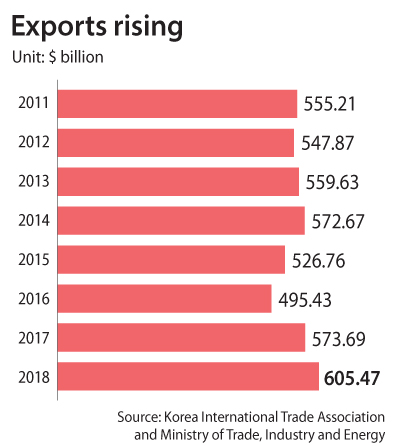 Korean exports topped $600 billion in 2018, a record high on the back of strong sales of semiconductors and petroleum goods.

The Ministry of Trade, Industry and Energy announced Monday that Korea’s exports totaled $605.47 billion in 2018, a 5.5 percent rise year on year.

Korea is the seventh country in the world to pass the $600 billion mark in annual exports. It shares that distinction with the United States, Germany, China, Japan, the Netherlands and France. Exports for 2017 were just shy of the mark at $573.69 billion.

Annual imports rose 11.8 percent on year to reach another all-time high of $535 billion, resulting in a positive trade balance of $70.5 billion. This marked the 10th consecutive year that the country has sold more goods than it bought.

Korea now claims 3.1 percent of global trade, the largest share to date. It is also the sixth-largest exporter in the world for the second year in a row.

Semiconductor exports rose 29.4 percent year on year in 2018, accounting for $126.71 billion or a fifth of all Korean exports. This marked the first time in the world that a country’s exports of a component - as opposed to a finished good - surpassed $100 billion in a single year.

Sales of cosmetics jumped 26.6 percent and medical supplies climbed 17.2 percent. Cosmetics were popular thanks to the growing interest in Korean pop culture and related merchandise like makeup and beauty products.

Exports to top destinations China and Japan both increased by 14.2 percent. Korea exported the most it ever had to China, the United States, Vietnam and India last year as well.

Korea’s trade balance in December was $4.6 billion, marking the 83rd consecutive month that the country enjoyed a surplus.

December exports fell slightly by 1.2 percent compared to 2017, however, due to falling oil prices and a global trade slowdown, according to the ministry.

“The hidden champions of 2018 exports are the small and medium-sized enterprises,” said the ministry. “Korea was able to export over $600 billion thanks to their efforts to strengthen R&D, expand to overseas markets and gain global competitiveness.”

“Korea managed to reach record trade figures and export over $600 billion for the first time despite unfavorable circumstances like the ongoing U.S.-China trade conflict and growing uncertainties in financial markets,” said Sung.

“We hope to achieve annual exports over $600 billion for two years in a row and go head-to-head against pessimistic sentiments by actively responding to issues concerning trade conflict and expanding into the Southeast Asian markets.”