Taxi industry remains idle in the face of innovation: As protests against carpooling grow, customers look for new options

Taxi industry remains idle in the face of innovation: As protests against carpooling grow, customers look for new options 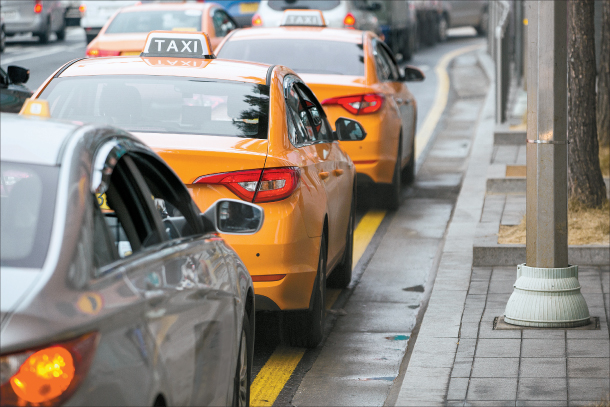 Taxis are a hot topic these days as drivers have gone on strike in opposition to carpooling services being introduced to the market. [SHUTTERSTOCK]

Even after spending an hour trying, sometimes people cannot get matched with a taxi driver when trying on a mobile call taxi application like Kakao T. On a busy night, those hoping that they will have better luck hailing a cab on the street soon find out that ever since the rise of taxi-hailing apps, their chances are slim to none.

With many complaining about the difficulties they face to get a taxi to go a short distance or landing a ride late at night, the demand for car-sharing and carpools options is growing increasingly louder.

Yet thanks to fierce opposition and protests by taxi drivers, a national conversation regarding car-sharing services - similar to what Uber operates elsewhere in the world - continues to be delayed. The four major interest groups for taxi drivers were invited to talk Friday with members of the ruling Democratic Party (DP) to hopefully come up with a solution to get through the stalemate and discuss options to improve the work environment for drivers, but they did not show up. The groups still adamantly defend their position that they won’t talk unless Kakao Mobility stops offering carpool services, which they think will hurt their business.

Kakao Mobility, which launched a beta version of its controversial carpool service last month, has pushed the product’s official launch date until they can find a solution that makes both taxi drivers and customers happy. Despite the delay, the number of people signing up to be drivers for the carpool service continues to grow. While Kakao does not reveal the exact number of drivers who have registered, it is estimated to be over 70,000 at this point, based on the numbered gifts the company gives to those who have registered.

Due to a law that prohibits individuals to offer paid transportation services, carpool drivers will only be allowed to offer rides twice a day. Even with these limitations in place, taxi drivers remain adamant in their stance that the carpooling service is going to hurt their business. At the moment, there are about 270,000 taxi drivers across Korea with 252,000 cars licensed, according to the Korea National Joint Conference of Taxi Association.

The organization argues that there have not been new regulations for carpooling services in the country, and said that their livelihoods are at risk in an official statement last week announcing that they will continue fighting.

One taxi driver even lit himself on fire in protest in front of the National Assembly in Yeouido, western Seoul, early last month, which led politicians and the carpool company to take a more cautious approach in launching the new service.

“Carpool services absolutely cannot replace the current taxi system,” said an official with Kakao Mobility, adding that the service is intended to meet a grey area that taxi drivers currently cannot cover fully. As a platform operator, the company has tried to hear what’s needed in the market, she added.

One solution that’s been discussed by industry experts is to put taxi drivers on a monthly payroll instead of having them pay a set amount of money to their companies in order to work. About one-third of the nation’s taxi drivers are hired by a taxi company to drive a car owned by the company, while the others own the taxis themselves. Since there is a daily amount they must reach, drivers are encouraged to pick and choose only the most lucrative customers.

The taxi companies have been lukewarm about making new system or services more convenient for customers because their focus has long been on making enough to surpass daily requirements to be able to bring money home. Hence, the systemic approach to minimize the wait time of each cab until a driver gets a new guest has not been widely researched.

Companies like Kakao Mobility have worked on creating such systems with information technology. They provide information on where to go to find customers based on collected data, but were not enough to inspire taxis to go to certain places that have traditionally been unpopular among drivers. Instead, the technology has left taxi drivers feeling threatened that their job might be on the line.

“Carpooling is nonsense,” said one Seoul taxi driver. “It’s another big company trying to pierce into an industry that’s been made by [individuals].”

As the debate has raged over the past several months, customers have become increasingly frazzled and worn down by the process and are starting to speak out. 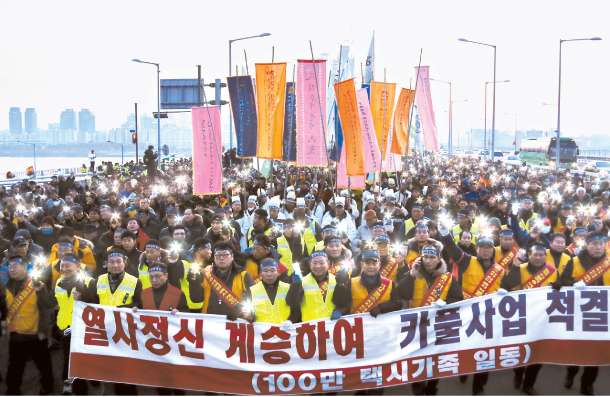 Customers are angry too

Koreans have taken to social media to express their displeasure with the way taxi drivers are responding to competition. In fact, cab drivers have long been a source of frustration for people throughout the country.

“[Unpleasant] smells such as cigarette smoke are just some of the things that are difficult to bear during my taxi rides,” said Kim Hye-jin, a 33-year-old Seoulite. “I have wanted to [shut-up] the drivers who share too much about their opinions on certain subjects and I get so nauseous when they keep pumping the brakes and make the ride bumpy.”

Kim Min-seo, who frequently takes a taxi from the Incheon International Airport to her home in Songdo, Incheon, has had difficulties with drivers who inappropriately comment on her looks and others who insist she pay them in cash instead of with a card. Kim said that because of the frequency of these incidents, she’d rather go through the hassle of driving her own car than take a cab.

With many customers echoing similar tales, the taxi drivers’ strike has failed to earn wide support from the public, and some have even welcomed the inconvenience of not being able to get a cab on the days when taxis went on a strike because it alleviated traffic throughout the city.

The lukewarm support for taxi drivers is also due to animosity over a taxi fare increase expected to go into effect in February. The base fare will go from the current 3,000 won ($2.7) to 3,800 won, and the nighttime base charge will jump from 3,600 won to 4,600 won. In the past, many customers have expressed their dissatisfaction that a rise in taxi fares has never resulted in drivers offering a better service, even though that is what customers are promised. In a 2014 survey regarding a 2013 taxi fare hike conducted by the Seoul City Council, 86 percent of respondents said that they didn’t see any changes in service after the prices went up.

“[Taxi drivers] should think more about improving the level of service they provide and about how they can adjust to the [changing] market situation,” said a man surnamed Chung in a Facebook post. “Competition is an essential factor in a market economy, but [taxi drivers] stand against competitors when what they should do is to compete freely.” 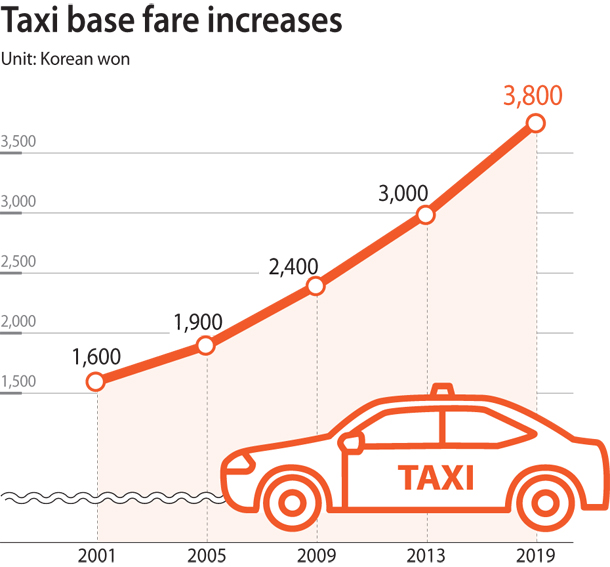 To alleviate issues concerning taxis, the government has suggested connecting existing taxis to Information Communication Technology to make it easier to provide their services online. To minimize abrasive and aggressive service and driving by some drivers looking to maximize their chances of earning more within a limited time, the government is also reviewing the idea of making sure drivers are paid on a monthly payroll instead of the current system.

However, talks with taxi drivers about any possible options have been halted because they want the Kakao carpool service to be off the table before engaging in talks about any other changes.

While the Seoul city government and the National Assembly took one step back from trying to work as a referee between the drivers and Kakao Mobility, Seoul city authorities have been working to order a ban on taxi companies that veto customers multiple times. The city government checked the reported cases of denials made by drivers over the past two years, and 22 companies were informed that they cannot operate some cars for 60 days. One company refused to take customers 25 times in the past two years. So far, the government has imposed restrictions on individual drivers, not the companies.

“We will root out drivers who deny customers so that taxis are something that anybody can take from wherever to wherever,” said a city government official.

Considering that most cab-related difficulties occur late at night, the city government is reportedly reviewing the option of introducing more late night cabs as well.

While Kakao is attracting all of the attention, T Map Taxi has seen a boom in customers. SK Telecom’s call taxi service said that its number of users hit 1.2 million in December, 13 times greater than the number of customers that registered in October. The number of drivers affiliated with T Map Taxi has jumped to 150,000 recently from around 30,000 in June.

The sudden rise of T Map Taxi is bolstered by the company’s new features, such as providing a calljabi, a call catcher, to drivers. Calljabi is a button that can be attached to a steering wheel so that drivers don’t have to take their hands off of the handle to hit “accept” on their smartphone while driving. 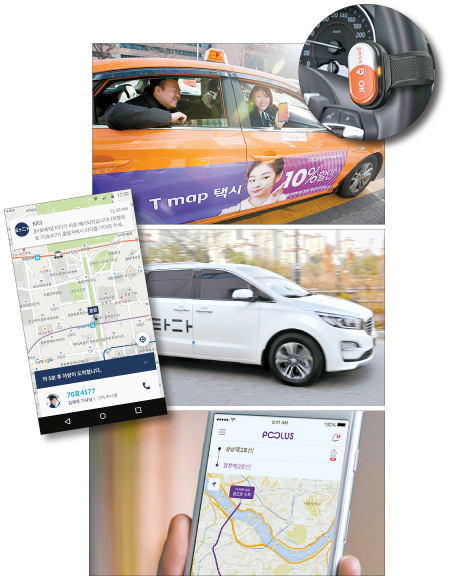 Top: T Map Taxi by SK Telecom has been promoting its service by giving discounts to customers and a button (pictured right) to drivers to pick up calls without taking their hands off of the steering wheel. Middle: Tada is a new transportation service that uses 11-passenger cars. Drivers are trained not to start conversations with customers other than checking the destination and asking if the music’s volume is acceptable. Above: A screenshot of carpool service Poolus, which has been struggling to keep its service popular among users. [NEWS1, SK TELECOM, TADA, JOONGANG ILBO]

After Uber Korea officially folded its business in 2015, many other car-sharing services have popped up, but with little success. Poolus and TiTiCaCa, which arrange a carpool among riders and drivers, each had their moment, but neither successfully overcame the limits of the Korean law that prohibits individuals being paid for offering transportation services.

After years of attempting to find a viable option, one that has gotten attention recently is Tada.

The service operates minivans that can fit 11 people inside, a loophole in Korea’s transportation act because passenger cars that carry 11 to 15 people can be legally leased with a driver. Socar, which offers car-sharing service, came up with the business idea of connecting drivers hired by other labor companies who can drive the leased car to take customers to their destinations.

The service launched in early October and 80 percent of customers have returned to the service, sharing positive reviews on social media and attracting more users. Drivers are trained to not initiate conversation with the customers and to only ask whether the volume of the music is OK while checking if the customers are wearing seatbelts. The cars provide cellphone chargers and customers are encouraged to recline in their seats as far back as they would like. The drivers get paid based on their working hours, so they don’t need to pick and choose lucrative long-distance customers. Fares are about 20 percent more than regular taxis.