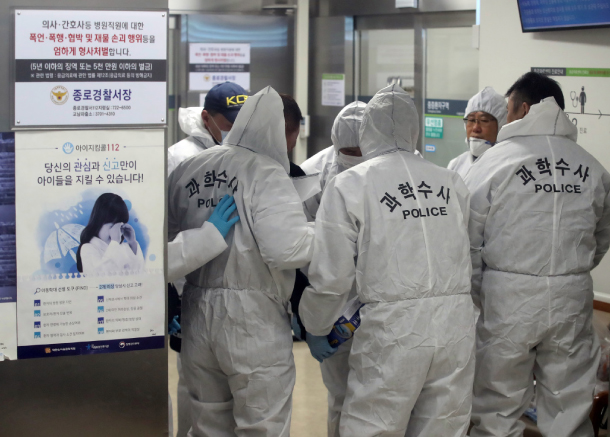 A National Forensic Service team visits Kangbuk Samsung Hospital, central Seoul, on Monday, hours after a renowned psychiatrist was stabbed to death by his patient. Investigators gather around the scene of the crime to collect evidence. [YONHAP]

Police officers arrested a 30-year-old man on Monday after he fatally stabbed Lim Se-won, a renowned psychiatrist at Kangbuk Samsung Hospital in central Seoul. Police charged the suspect with murder and took him into custody.

According to police, the suspect visited Lim’s office on Monday for a psychiatric consultation, which is when the stabbing occurred. It was later revealed that the suspect was a patient of Lim’s who suffered from bipolar disorder.

Lim had ordered his hospitalization months before, and this was their first consultation after he was discharged.

Lim was immediately moved to the emergency room, but died while receiving treatment. A nurse called the police and they arrested the suspect at the scene of the crime.

The police said on Tuesday that although the suspect admitted to the crime, he talked incoherently about why he stabbed the doctor.

Lim was best known for creating a communication model that doctors should follow when dealing with patients who suffer from depression.

He received an award from the Korea Association for Suicide Prevention, which recognized his contribution to developing the psychiatric model.

Hours before his death, Lim attended a meeting that was organized to make sure that suicide prevention classes were mandatory for medical school students.

After Lim’s death, the Korean Medical Association (KMA) said assaults by patients on medical staff were rising in Korea.

In a phone conversation with the JoongAng Ilbo on Monday, Choi Dae-jip, president of the KMA, pointed out that assaults weren’t confined to doctors who worked at university hospitals, but happened to all kinds of medical personnel.

A day before Lim’s death, a doctor in a hospital in Incheon was physically assaulted by a patient. The suspect admitted he was mad at how long he had to wait to see a doctor.

Police were also called at a neuropsychiatry clinic in Gangneung, Gangwon, in July when a patient threatened to hit a staff member with a hammer. Soon after the threat, the patient left the clinic and returned with a hammer.

According to a report by the Ministry of Welfare submitted to Rep. Kim Seung-hee of the Liberty Korea Party (LKP), in 2017, there were 893 cases of assault committed by patients.

Of the 893 cases, 365 were physical assaults, while the rest were verbal. Some 67.6 percent of the perpetrators were intoxicated.

A bill that mandates the punishment of people who attack medical staff was approved by the National Assembly. As of this year, perpetrators will face prison sentences of up to 10 years or a fine of 10 million to 100 million won ($8,900 to $89,000) if they harm medical staff in emergency rooms. If the assault results in death, the perpetrator will be looking at five years to life in jail.

The bill stipulates that the charges would not be reduced should the perpetrator be confirmed to have been drunk, which has commonly been the case in the past.

A bill dealing with assault on medical staff in places other than in emergency rooms is still pending in the National Assembly.

In light of Lim’s murder, an online petition that requests even stricter punishment for people who threaten the lives of medical staff members was uploaded to the Blue House petition board on Monday. Over 17,000 people have signed the petition.