Kim Hyun-ki
The author is the Washington bureau head of the JoongAng Ilbo.

At the end of last year, a journalist from a third country visited North Korea and had a drink with a high-level North Korean foreign ministry official. The official got drunk and began talking about U.S. President Donald Trump. He asked whether Trump would be impeached. He had more concerns than anticipation. In contrast, he was confident about North Korea’s 2019. When asked why he was so confident, he replied: “we have South Korea. We don’t need the backing of other countries.”

North Korean leader Kim Jong-un’s New Year’s address demonstrates that confidence. He spoke about inter-Korean relations for seven minutes in the 30-minute speech. He said that external intervention should not be allowed, expressing an intention to resume tourism activities at the Kaesong Industrial Complex and Mount Kumgang. It skillfully placed pressure on South Korea. The speech reflects Kim’s thoughts that while North-U.S. talks are stalled, it wouldn’t be so bad for Pyongyang to use South Korea and carefully play the game of “denuclearization of North Korea” versus “denuclearization of the Korean Peninsula.” Of course, the Blue House welcomed it. Somehow, Pyongyang has taken center stage. I feel I saw the inter-Korean forecast in its entirety on Jan. 1.

What about the North-U.S. relations for 2019? There are, of course, both best-case and worst-case scenarios. The best-case scenario would see a second North-U.S. summit between January and March, the North report its nuclear weapons and facilities, an agreement for verification and inspection, Washington lift sanctions and a joint Nobel Peace Prize win in October. Conversely, the worst-case scenario would see the cancellation of a second summit, the spread of skepticism, the scrapping of the Singapore Agreements and a military clash.

However, considering Kim Jong-un’s mention of seeking a new path in his New Year’s address and the atmosphere in Washington, the most realistic scenario would be a high-level or working-level meeting at the beginning of the year, a tug-of-war over details of denuclearization, vague progress during the U.S. presidential campaign period and arms reduction talks with North Korea as a nuclear state. 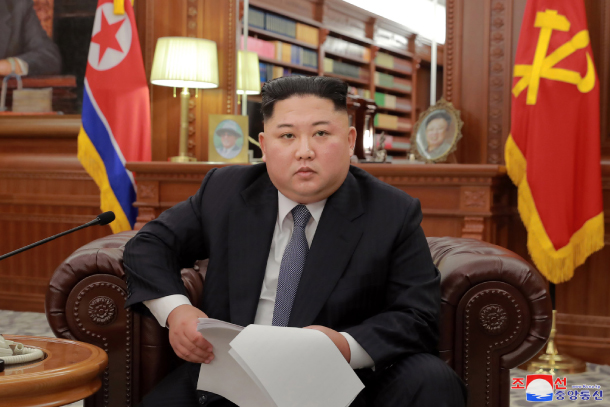 North Korea leader Kim Jong-un delivers a New Year’s address at the headquarters of the Central Committee of the Workers’ Party in Pyongyang on Tuesday. [YONHAP]

The prolonged process can evolve into a “management mode” as Trump delays — or gives up — on the denuclearization of North Korea and uses the North’s suspension of nuclear and missile tests as an accomplishment for his re-election campaign. North Korea has the option to mass-produce small and lighter nuclear weapons, and possess 100 nuclear warheads by 2020. The two leaders may think they have nothing to lose. The Moon Jae-in administration may welcome that peace has been earned.

After one of his team members said the Blue House spied on private citizens, Senior Presidential Secretary for Civil Affairs Cho Kuk countered, saying three people can fabricate a tiger that does not exist. Actually, it could apply to the denuclearization of North Korea. Denuclearization is nowhere to be found, but the three — Trump, Moon and Kim — can create the impression that the goal has been attained.

As a war becomes increasingly long, people in the countries involved might question their motives. It happened during the Trojan War and the Hundred Years’ War between England and France. As people grow tired, they forget about the war’s essence and compromise. But the talks for the denuclearization of North Korea should be different. There should be a process for holding the North accountable for nuclear provocation and the violation of the international law, and forcing it to change. Throughout the process, negotiation tactics can change, but arguing on North Korea’s behalf is not right. The public increasingly feels that some nuclear program in North Korea can be allowed if peace can be attained.

I do not fear either the United States or North Korea: I fear us. In 2019, we should make sure the three leaders don’t create a “tiger” that even does not exist. It is our duty and fate to leave a nuclear-free Korean Peninsula to the future generations: this year should be the year in which the three leaders catch the tiger of denuclearization.