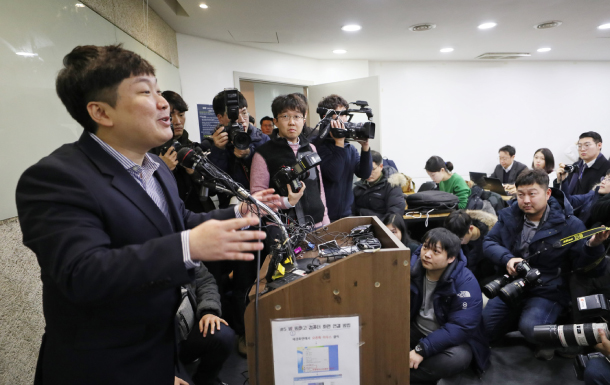 The controversy between an ex-bureaucrat whistle-blower and the government is entering a new phase.

The 32-year-old former employee of the Ministry of Economy and Finance, Shin Jae-min, held a press conference Wednesday in which he disclosed the name of the former Blue House secretary who pressured the Finance Ministry to keep the national debt-to-GDP ratio high to make the previous Park Geun-hye administration look bad.

Shin said he has heard it directly not only from then-Finance Minister and Deputy Prime Minister for the Economy Kim Dong-yeon but also from lower-level employees at the Finance Ministry as they talked on the phone with the Blue House.

“I heard the calls from the Blue House and the unreasonable orders,” Shin said. “I’ve experienced it all.”

He said it infuriated him that even when the finance minister decided not to issue deficit-financing bonds, the Blue House forced the ministry to.

He said Finance Minister Kim gave the goal of raising the national debt-to-GDP ratio up to 39.4 percent.

According to Shin, the Finance Ministry was looking for ways of reducing an issuing of 8.7 trillion won ($7.8 billion) worth of deficit-financing bonds since tax collections had exceeded the government’s initial goal.

Printing the bonds would only raise the nation’s debt.

“The Deputy Prime Minister [Kim] told us that we shouldn’t lower the debt-to-GDP ratio for 2017, giving a specific number of 39.4 percent,” Shin said.

The whistle-blower said he uploaded a YouTube video accusing the Blue House of interfering in private companies’ top executive positions and the debt ratio not to make money but because he wanted to reveal the injustices he witnessed.

“I didn’t make the YouTube video to promote myself to make a living,” Shin said. “I haven’t been able to do any work since I left the Finance Ministry five months ago.”

He said he was ashamed of what he saw and had to do as a civil servant and owed it to society to blow the whistle.

“Interest rates surged after the buyback [of treasuries] was canceled,” Shin said. “Although the buyback itself may not have had any meaning to it, there would have been companies and investors that may have suffered from the sudden decision.”

The government on Nov. 14, 2017, canceled a buyback of 1 trillion won worth of national treasuries. It had planned to do the buyback on Nov. 15. As a result interest rates on three to 10-year treasuries on that day shot up as much as 0.03 percentage points.

Shin said it took him this long to come forward because he waited until all the top brass, including the finance minister, left the organization.

He said he hopes his actions will encourage others to report injustices.

Meanwhile, the Finance Ministry on Wednesday recommended Shin be prosecuted for exposure of government records.

The ministry said all public servants are prohibited from leaking information obtained in the workplace.

“There’s a concern about the impact on normal government administration if a second or third Shin Jae-min situation arises if we let this one go without any penalty,” said Yoon Tae-sik, the Finance Ministry’s spokesman, said on Wednesday.

The Finance Ministry on late Tuesday released a statement in which it refuted its former employee’s claim that the government issued 4 trillion won worth of deficit-covering bonds in 2017, despite the fact that there was no need for them, to make the previous Park Geun-hye administration look bad.

If the debt ratio was lowered in following years - say in 2018 and 2019 - it would look as though the Moon government did a better job in managing the national debt.

The ministry argued that issuing 4 trillion won of bonds wouldn’t have made much difference.

It said the issuance of the bonds would have raised the national debt-to-GDP by roughly 0.2 percentage point from 38.3 percent to 38.5 percent.

It added that even if the national debt-to-GDP ratio went up, the blame would be on the Moon government and not its predecessor.

“It would be [recorded] as the Moon Jae-in government’s first year national debt ratio,” the statement said.

The ministry said that in 2017 the government initially planned to issue 28.7 trillion won worth of deficit-financing bonds.

Considering the economic situation and the market for bonds, there was a suggestion that instead of issuing all of 8.7 trillion won, the amount should be reduced to 4 trillion won. And after internal discussion within the ministry and related institutions, it decided to issue 4 trillion won worth.

The ministry also defended itself against the disclosure by Shin of Kakao messages between a deputy minister and several of the ministry’s employees including Shin dated Nov. 14, 2017.

The Kakao message showed the unnamed deputy minister saying the core of the issue was to limit a reduction in the national debt in 2017.

Shin in his YouTube video said the message was an order to issue the deficit-covering bond to the maximum limit.

“The situation at the time was Deputy Prime Minster [Kim] ordering a full issuance of the 8.7 trillion won [bonds] and the [employees at the ministry] looking into the possibility of additional issuance within the limit that the bond market could accept since it could really shake up the bond market,” Shin said on YouTube.

The ministry claimed that the deputy minister’s statement in the Kakao message was an opinion about the overall national debt situation.

The ministry emphasized that there were no orders on the issuing of the bonds from the Blue House.

The ministry also called false Shin’s claim about the ministry’s decision to cancel its buyback of 1 trillion won worth of national treasuries on Nov. 14, 2017, saying it was an inevitable decision made in consideration of various factors.