Chaebol heads look for profits and more in 2019

Chaebol heads look for profits and more in 2019 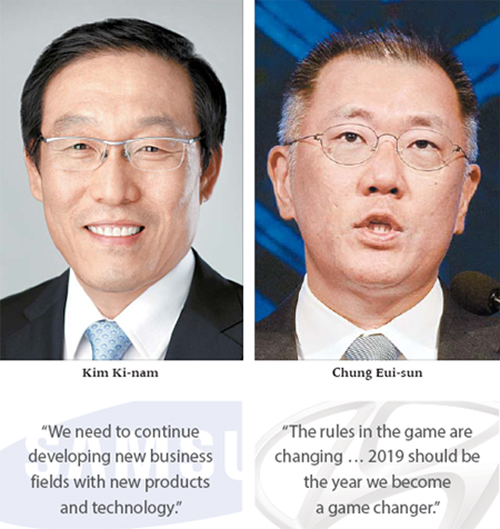 Local companies are in for a difficult year, facing uncertainty on the economic front - both globally and domestically - and a trade war between the United States and China. The situation isn’t much better for large conglomerates that heavily depend on exports.

Samsung Electronics Vice Chairman Kim Ki-nam stressed the importance of employees challenging themselves and investment to build a base for future growth at an internal New Year’s celebration event held in Suwon, Gyeonggi, on Wednesday. The year 2019 marks the IT giant’s 50th anniversary.

Unlike other conglomerates that have members of the founding family deliver a New Year’s message to the entire group, each affiliate at Samsung receives their own message from their respective head. Samsung hasn’t had a company-wide speech since Chairman Lee Kun-hee gave his last one in 2014.

“Ten years ago, we overcame a global economic crisis and made a leap to become a world-class IT company - this year, our goal is to create a basis to become a top-class, 100-year-old firm,” said Kim.

“We need to continue developing new business fields with new products and technology, encourage a corporate culture that supports failure and push through bold challenges and investment to create a foothold for sustainable growth.”

At Hyundai Motor Group, Korea’s second largest conglomerate, Executive Vice Chairman Chung Eui-sun stressed his intention to ramp up investments in fields like the sharing economy, artificial intelligence and smart mobility. Cars are one of the most active fields in tech development at the moment, and Chung’s speech reflected the attention to grab the lead in the sector. 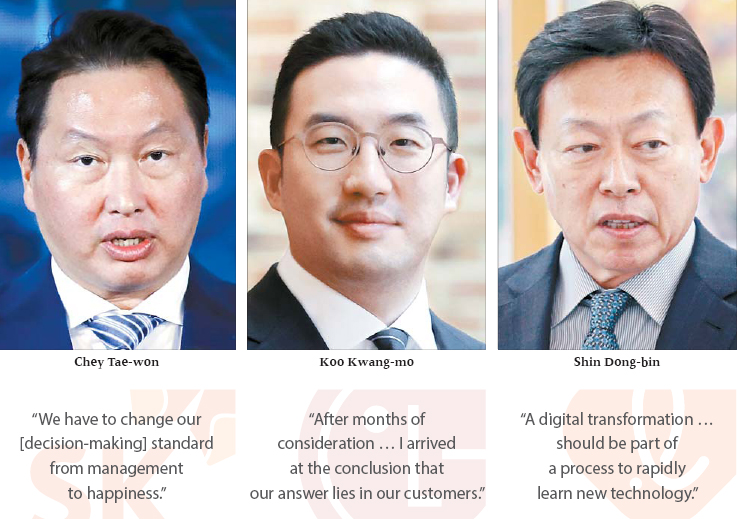 “After my promotion to executive vice chairman, I’ve been to many parts of the world … and what I’ve deeply learnt is that the industry paradigm is starting to shift radically - things that seemed like works of imagination in the past are turning to reality, and the competition is ongoing regardless of industry barriers,” he said.

“The rules in the game are changing … 2019 should be the year we become a game changer that paves the industry’s future, instead of a being follower.”

Compared to other New Year’s messages, Chung’s speech came with concrete goals such as plans to release 13 new cars this year, develop 44 eco-friendly cars - hybrid, electric and hydrogen-fueled - by 2025 and launch test drives of autonomous robot cabs in 2021.

This was Chung’s first time delivering a New Year’s message at such an event. He rose to the current position last September and has been conducting internal reforms to take over the leadership from his father Hyundai Motor Group Chairman Chung Mong-koo.

An urgent drive for change was also found at retail conglomerate Lotte Group.

The core keyword of Chairman Shin Dong-bin’s New Year’s message was transformation. He mentioned the possibility of its affiliates starting from scratch to redefine values and target customers in the process of discovering future business opportunities. Digitalization across all affiliates also came up as a core focus for the year.

“A digital transformation should not simply be about applying information communication technology to our existing businesses or developing services using it,” he said. “It should be part of a process to rapidly learn new technology and applying it to every step of our business management. Upon that system, we should be able to discover business models that create synergy with our company.”

LG and SK struck a slightly different tone in their New Year’s messages.

Koo’s message had a more back-to-basics approach with a focus on customers. The word came up 30 times during his 10-minute speech.

“After months of consideration to find LG’s next task and future direction, I arrived at the conclusion that our answer lies in our customers,” he said.

“Today, products and service based on state-of-the-art technology are released in the market on a daily basis, but if they’re not chosen by customers, they rapidly disappear. Consumption nowadays is not confined to country or company, and therefore, customers always have the upper hand.”

For SK Group’s New Year’s celebration event, Chairman Chey Tae-won once again took a different approach to the staid, formal speech favored by his contemporaries. Last year, Chey appeared on stage without a tie in a TED Talk format to make a less formal presentation to employees.

This year, SK took things one step further, hosting a panel talk featuring the CEOs of SK Innovation, Telecom, Hynix, Chemical and Networks. The discussion, which mainly talked about the theme of happiness, was aired live to employees. Chey delivered a wrap-up speech at the end of the event, but let the chief executives hold the discussion.

“Our discussion today was about what we could do to bring happiness to our next generation,” he said, later suggesting four methods for SK to realize that value.

“First, we have to change our [decision-making] standard from management to happiness. This also has to be followed by practice and active participation.”