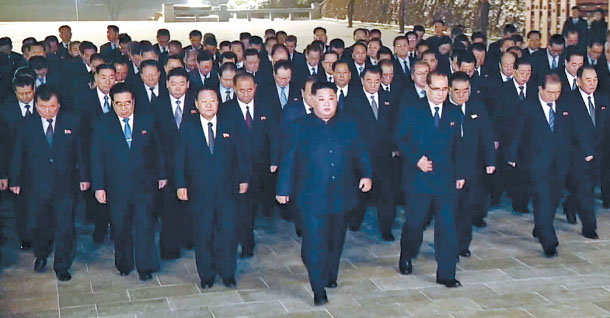 The political winds are shifting for Kim Yong-chol, the vice chairman of the Central Committee of North Korea’s ruling Workers’ Party, who was right beside North Korean leader Kim Jong-un when he met U.S. President Donald Trump in June. Trump dubbed him the “second most powerful man in North Korea,” and Kim Yong-chol was present at all three inter-Korean summits in 2018. This article will focus on the intense power dynamics between Kim Yong-chol and Choe Ryong-hae, director of the Workers’ Party, that have come to play in North Korea toward the end of 2018.

Rumors about Kim Yong-chol started to surface in Seoul and Washington in early November, right around the time high-level talks between U.S. Secretary of State Mike Pompeo and Kim were called off. According to a North Korean source, “Prior to the talks, Kim had solicited for his position as a negotiating partner.”

In other words, Kim, who is normally in charge of foreign policies dealing with South Korea, wanted to exert his influence over North Korea-U.S. negotiations. The source added, “Kim had met with Andrew Kim, the U.S. Central Intelligence Agency’s head of the Korea Mission Center, to convey his wishes.”

Kim was at the forefront of Kim Jong-un’s rapprochement with South Korea in 2018. Even after Kim Jong-un addressed the possibility of improvement between the two Koreas in a New Year’s address and decided to send North Korean athletes to the 2018 PyeongChang Winter Olympics, Kim Yong-chol played an active role. Kim Yong-chol attended the closing ceremony of the Winter Games even as South Korean media was identifying him as the mastermind of the sinking of the Cheonan warship in 2010, which killed 46 South Korean sailors. Afterwards, Kim solidified himself as Kim Jong-un’s second in command.

Kim Yong-chol visited the White House early last June. Trump provided him with state-of-the-art security, including a number of trained bodyguards and his own Cadillac. Satisfied with the letter from Kim Jong-un’s letter that Kim Yong-chol delivered, Trump went so far as to walk him back to his car to see him off.

A couple of weeks later, Kim’s political profile hit an all-time high during the North-U.S. summit in Singapore, in which he stood next to leader Kim Jong-un.

According to the source that leaked Kim Yong-chol’s secret meeting with Andrew Kim, “Meeting Pompeo when he visited North Korea and his visit to Singapore with leader Kim were Kim Yong-chol’s way to solidify his position as a negotiator.” This was most likely the reason why he tried to strike a deal with the United States.

That meeting with Andrew Kim may have been a step too far, and it was only a matter of time before Kim Yong-chol’s request reached the ears of high-ranking North Korean officials, namely Choe Ryong-hae - who is far more frequently described as the second most powerful man in the North. According to an official who recently visited North Korea, “The Workers’ Party is looking into Kim’s recent request and the problematic issues that occurred because of it.” This “looking into” could be interpreted as Choe’s attempt to eliminate or at least curb Kim Yong-chol’s boosted political influence.

Experts are pointing out how Choe’s recent actions mirror the steps he took to eliminate Hwang Pyong-so, then director of the Army’s General Political Bureau. In October 2017, Choe implemented an internal investigation of Hwang and the political bureau he was in charge of. This investigation uncovered the supposed fact that Hwang disregarded orders and fabricated reports that were sent to Kim Jong-un. Hwang had to step down from his position as second in command and was ordered to spend time in a concentration camp. Experts say Choe was exacting revenge from Hwang, who took his position in 2014.

Other experts point out that Choe’s reaction could be more political jockeying, and may involve a crackdown on corruption. The Dec. 10 edition of the Rodong Sinmun, the official newspaper of the Workers’ Party, went so far as to report that “selfishness and unfavorable political viewpoints were resonating amongst a few officials,” giving notice of a future possible crackdown on political corruption.

“The reason why [North Korean officials] didn’t just narrow the investigation to Kim Yong-chol could be seen as a political movement to catch any type of corruption that is to arise in the future,” said Ahn Chan-il, president of the World Institute for North Korea Studies.

Early last year, South Korea’s national intelligence agency reported that high-level officials of the Rodong Sinmun were purged after they didn’t thoroughly report Hwang being ousted from office while military unit officials in Pyongyang were executed after they were accused of corruption.

Since November, there have been no significant moves on Kim Yong-chol’s part that could be used by his rivals. However, unflattering reports about Kim’s past have been reported in the North’s media. In particular one report said he may be excluded from negotiations with the United States because he has a “military background and is infamous for his hard-line diplomatic opinions.” Other media reports have said that “Kim had met with Andrew Kim.” The National Intelligence Service has yet to confirm if this meeting actually occurred.

South Korean sources with knowledge of North Korea said, “There has been no suspicious movement made on Kim Yong-chol’s part.” On Dec. 16, the North’s state media reported that leader Kim Jong-un paid tribute to his father, former leader Kim Jong-il, on the seventh anniversary of his death. Accompanying Kim was, on his immediate right, Choe Ryong-hae and, on his immediate left, Ri Su-yong, vice chairman of the Central Committee of the North’s Workers’ Party. Ri is known for being Kim Jong-un’s guardian while he was studying abroad in Switzerland.

“The placement shows that Kim will depend on Choe for internal affairs within the North’s Workers’ Party and will rely on Ri for diplomatic affairs,” analyzed a South Korean government official.

What needs to be carefully watched are the calls Kim Jong-un makes about Kim Yong-chol in response to the changing state of North Korean state of affairs. “If inter-Korean policies are continuously put on a standstill or if something goes wrong with North-U.S. negotiations, then there is a high possibility that Kim [Jong-un] will hold Kim Yong-chol responsible,” said Kim Jung-bong, a professor at U1 University. In other words, it is impossible to exclude the possibility that any official who is in charge of diplomatic relations could become a scapegoat if things go wrong.

Recently, North Korea has gone back to being negative about South Korea and the United States in their press. “We need to take into careful consideration Kim Jong-un’s New Year’s Day speech to see what kind of diplomatic direction he will take in the future,” said Kim.