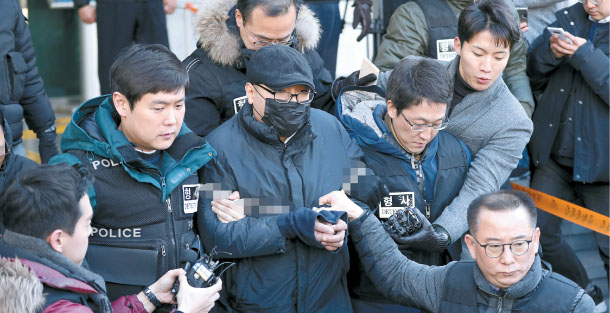 The suspect in Dr. Lim Se-won’s murder, surnamed Park, is surrounded by reporters as he walks out of Jongno Police Precinct in central Seoul on Wednesday. Park was transported to the Seoul Central District Court, where he had a hearing in front of a judge who will decide whether or not to issue an arrest warrant against him. [YONHAP]

Patients of Dr. Lim Se-won, a psychiatrist specializing in suicide prevention who was murdered on Monday at the Kangbuk Samsung Hospital in central Seoul, are taking to social media to commemorate his life’s work.

“Today I got a text message reminding me that I had a consultation appointment with Lim,” wrote a patient of Lim’s on social media. “My heart ached when I saw that text.”

Choosing to openly commemorate Lim is an especially difficult choice for his patients, as visiting a psychiatrist carries a stigma in Korea. Lim’s colleagues are also joining to express their sorrow, and affiliated medical organizations have agreed to organize a massive memorial service for Lim.

Many of Lim’s patients have revealed their experiences with Lim and wrote down their resolutions to “keep their promises” with Lim.

The suspect in the murder, who goes by the surname Park, had a hearing on Wednesday at the Seoul Central District Court, where the judge will decide whether or not to issue an arrest warrant to detain him. Park remained silent when reporters asked him about his motive.

After Lim’s death, patients and medical staff are asking for a revision of a law that bans medical staff from forcing mentally ill patients to be hospitalized if the patient does not want to.

“Doctors who work in this field feel [like they have receive more threats from their] patients ever since the law was implemented in May 2017,” said Kwon Jun-soo, the chairman of the Korean Neuropsychiatric Association (KNA). “I’m not saying that all mentally ill patients are a threat, but the ones that show acute irrational behavior and suffer from paranoia [should be regularly monitored by medical staff].”

In response, the Ministry of Health and Welfare announced on Tuesday that they will continue to work on revising the controversial law.

The revisions will require that mentally ill patients discharged from the hospital be introduced to a local mental clinic. The clinic will then be responsible for monitoring the patient’s mental health for a year. All treatments and consultations recommended by the clinic will be mandatory.

In addition, the KNA and the Health Ministry announced on Wednesday that they will push for legislation that will help increase safety for medical staff, in line with the wishes of Lim’s family.

“It is the wish of the deceased doctor’s family that a safe environment is set up for medical staff so that patients suffering from mental diseases can seek help without any prejudice or discrimination,” said a representative of the KNA.

“This accident should not prompt people to think that mentally ill patients are dangerous,” said a Health Ministry official. “It is, however, necessary for a safety plan to be offered to psychiatrists who spend most of their consultation one-on-one with their patients.”