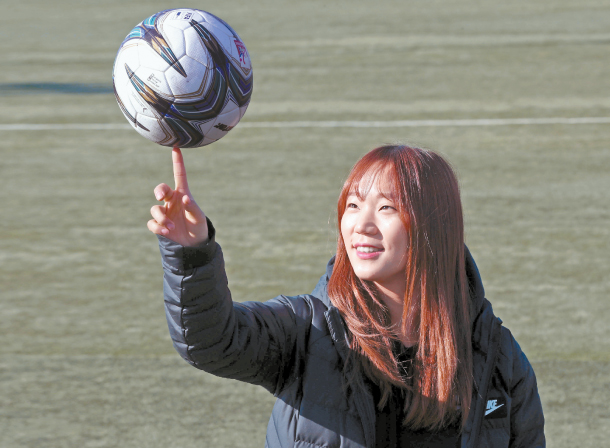 The Korean women’s football team may not enjoy the same fame as their male counterparts, but they have seen plenty of progress worth celebrating over the past two years. The real test comes later this year, with the 2019 FIFA Women’s World Cup in France.

As the Taeguk Ladies prepare for their World Cup campaign, Jang Sel-gi is definitely the player to watch.

While South Korea was losing 0-1, Jang scored an equalizer in the 75th minute to finish with a draw. With a 1-1 draw, Korea finished first in the Group and earned their spot in the AFC Women’s Asian Cup.

Then, during the fifth and sixth place match against the Philippines at the women’s Asian Cup on April 17, 2018, Jang scored the winning goal, assuring Korea’s ticket to the FIFA World Cup.

On June 8, Korea will begin their World Cup campaign with a match against host France at Parc des Princes. The stadium can hold up to 47,929 fans.

Jang is also dominating the domestic league. During the last season, Jang led the Incheon Hyundai Steel Red Angels to their sixth straight WK League victory, good enough to win her the prestigious Player of the Year award from the KFA, along with Hwang Ui-jo of Gamba Osaka.

Last season with the Red Angels, Jang played as left-midfielder and scored 11 goals with seven assists. With the national team, Jang plays as left defense, but rather than a regular defensive player, she is a defender who scores.

Jang started football in sixth grade after watching her father and brother play football. Jang’s speed is her greatest strength - she travels 100 meters in about 14 seconds.

“I also played center-forward,” Jang said. “I think I played all the positions except goalkeeper.”

Four years ago at the 2015 FIFA Women’s World Cup in Canada, Korea advanced to the round of 16 but Jang was not a part of the team.

“I joined INAC Kobe Leonessa [in Japan] at the end of 2014, but I struggled to make the adjustments,” Jang said. “That led me to miss my Taeguk mark. I watched the World Cup on television. This is my first World Cup.”

Although this is Jang’s first World Cup for the senior team, this will not be her first time competing at a FIFA event. In 2010, Jang was part of the U-17 women’s team that won the FIFA U-17 Women’s World Cup. Jang played a significant role in leading the team to a victory, playing as left- and right-defense and in offense. Then, at the 2013 AFC U-19 Women’s Championship, she won the scoring title at eight goals.

“At the time, we told ourselves that since we’re not as good as the other teams, we need to play at 120 percent in all the matches,” Jang said. “In the group matches at the World Cup, our objective strategies will be weaker, but we will try our best. We’ll only have hopes if we finish the group matches with a record of one win, a draw and a loss.”

At the upcoming World Cup, Korea - ranked 14th - has been assigned to Group A with France - ranked third - Norway - ranked 13th - and Nigeria - ranked 39th. Having watched the draw ceremony live on YouTube, Jang said she shivered when she saw the pairing.

“France, Germany and the United States are the favorites to win. Korea met France in the round of 16 in 2015 and lost 0-3,” Jang said.

For now, Jang and the team have set their goals on winning a match against either Nigeria or Norway.

During the FIFA World Cup in Russia back in June 2017, the Korean men’s football team finished with an upsetting 2-0 victory against the defending champion Germany. Although Korea failed to advance to the round of 16, their victory still made headlines around the world.

Jang hopes to continue that success with the women’s team.

“It gave me goose bumps because it was a result no one was expecting,” Jang said. “For Korean women’s football, not only France but it’ll be a miracle if we win against any teams. But if we do defeat France, it’ll be a bigger miracle.”

When the WK League starts on Monday, Jang will start her season with the Red Angels, although the games will likely only be watched by small crowds. Despite the constantly low turnout, Jang has not given up her hopes of improving the sport in the country.

“Just as the men’s team proudly represented Korean football throughout 2018, the women’s team will be the ones to represent Korea in 2019,” Jang said.