How the early days of cubism fundamentally changed art: Exhibit shows the ways artists like Picasso and Braque flipped the script

How the early days of cubism fundamentally changed art: Exhibit shows the ways artists like Picasso and Braque flipped the script 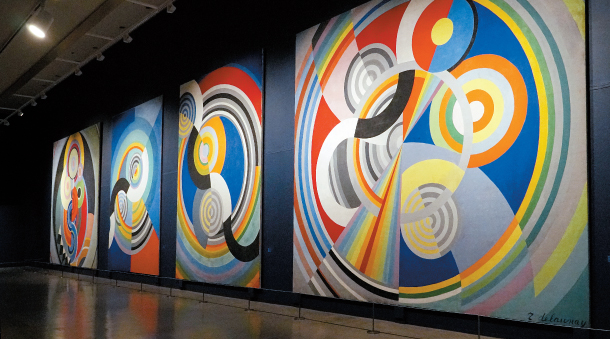 The last section of the “Picasso & Cubism” exhibition features four large pieces by Robert Delaunay, which are being shown outside of France for the very first time. [JEON TAE-GYU]

There are a number of reasons why modern art is difficult for many viewers to grasp without explanation. Marcel Duchamp (1887-1968) created confusion in the art world when he questioned whether an artwork must be created by the artists themselves. With his pivotal work “Fountain” (1917), Duchamp spearheaded the idea of conceptual art when he decided to sign a urinal and call it a piece of art.

A different realm of difficulty was posed by artists Pablo Picasso (1881-1973) and Georges Braque (1882-1963) through their revolutionary cubist paintings. If Duchamp challenged the authorship of art, Picasso and Braque challenged the representation of art: does art have to represent the world as we see it? Do we carry the ability to disassemble reality and reassemble it in a way that is not limited to the dimensions of the real world?

The “Picasso & Cubism: Masterpieces from Musee d’Art Moderne de la Ville de Paris” exhibition now being shown at the Hangaram Art Museum in the Seoul Arts Center, southern Seoul, looks at the world of Cubism from its birth in 1907 to its later development. The 90 works by 20 artists have been taken from the contemporary art section of the Museum of Modern Art of City of Paris - the anglicized name for the Musee d’Art Moderne de la Ville de Paris - including some large-scale paintings that have traveled outside of the city for the very first time.

Though the exhibition is entitled “Picasso & Cubism,” the exhibition does not necessarily limit itself to the cubist works created by the Spanish painter. Rather, it includes a few of Picasso’s works to contextualize Cubism’s revolutionary aspects in the Western art world and how it was subsequently renewed by those who followed him.

Cubism starts with this idea: although the human eye perceives the world in 3-D, it can only see an object from a certain point of view at a certain point in time. So when a person looks at something from the front, they fail to see its side, and when they see it from the side, the frontal view is lost. But as rational beings, humans are aware of the fact that objects possess additional dimensions. It is here that Picasso and Braque began their thought experiments.

“The idea was to reduce the visual reality into a 2-D surface and at the same time to represent the figures - the people and the objects - from different points of view simultaneously,” said Julia Garimorth, the chief curator at the Museum of Modern Art of City of Paris. “[With cubist artworks], the viewer sees all the different angles at the same time. [This] was revolutionary because before this moment, European painting developed much like a window to the landscape, which was itself an illusionary space.”

The first person to step out of this illusionary window was French artist Paul Cezanne (1839-1906), dubbed the father of modern art, and also the inspiration for both Picasso and Braque who later began the cubist movement. Cezanne was fascinated by African sculptures that used simple forms to express essence. His works and the sculptures that inspired him sit in the first part of the exhibition, “Origins of Cubism: Cezanne and Primitivism.” 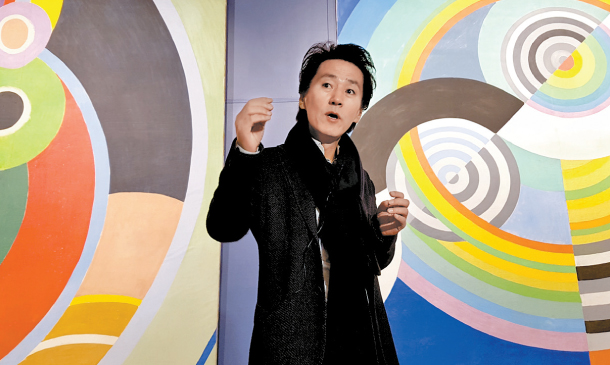 Seo Soun-jou, the director of the exhibition, explains the history of cubism and cubist art in the “Grand Decorations 1937-1938” section of the exhibition at the Seoul Arts Center, southern Seoul. [YOON SO-YEON]

According to Seo Soun-jou, the director of the exhibition, Cezanne believed that it was not about representing the world realistically, but about reducing them to their simplest geometric figures - such as cubes, cylinders and spheres - as can be seen with “L’Estaque le matin, vu a contre jour” (1882-83) or “Villa au bord de l’eau” (1890).

“Cezanne is referred to as the father of modern art because he was the one who took away artists’ obsession with painting well,” said Seo. “What this meant was that from Cezanne onwards it wasn’t about capturing the most exact form of the subject, but rather about capturing the essence with conciseness. If Braque had tried to capture that essence within landscape, Picasso did so with people.”

There is an argument among art experts over who began Cubism. Some see its origins in Braque’s cubist work “Houses at L’Estaque” (1908), while others see it in Picasso’s 1907 work “Les Demoiselles d’Avignon” (The Young Ladies of Avignon), which was not revealed to the public until many years later.

The debate aside, the second part of the exhibit looks at the beginnings of Cubism by the two geniuses in “Invention of Cubism: Picasso and Braque.” Walking through the exhibit, it’s hard to discern what the paintings are about without looking at their titles. Sometimes they do not even help much. Who would have guessed that the brown-colored patchwork of squares and triangles in “Tete d’homme” (1912) by Picasso was in fact the painting of a man? And who would have been able to see the wine glass and cigarette pipe in Braque’s “Nature morte a la pipe” (1914) if they were not told of their presence?

But according to director Seo, Cubism was groundbreaking because it infused the idea of reality into painting, which was not the case in the traditional Western art forms that postdated the Renaissance. Aside from the multi-perspective representation of a single subject that Cubism started, cubists also actively took on the question posed by Fauvism and Henri Matisse (1869-1954): why does art have to be beautiful?

“Before the fauvists, art had to be beautiful,” said Seo. “Even if the painting had reflected a scene of the real world, it had to be done so in a way that met the general standards of beauty. From the fauvists and onwards, especially with cubists, they actively disassembled the real form to illustrate the chaotic and puzzling side of the real world. For cubists, artists weren’t just people who painted beautiful things, but people who gave others the chance to think about the world they’re living in through art.”

The exhibition thus continues on to the third section, “Section d’or and Orphism of Delaunay,” displaying works by following cubists who took on Picasso and Braque’s mission and added their own colors to it, especially Robert Delaunay (1885-1941) and Fernand Leger (1881-1955). While Leger, one of the biggest names in the later cubist movement, stuck to pieces’ real forms while substituting them with geometric counterparts, as can be seen in “Contrastes de formes” (1918), Delaunay engaged himself in the abstract world by diving in to the space with blocks of colors.

More of Leger’s works are featured in the fourth section, “Cubism between two World Wars,” as well as a tapestry of the famed “Le danse” (1925), made in 1975. And the last section, “Grand Decorations 1937-1938,” finishes off the exhibition by awing the audience with four large-scale paintings by Delaunay. The five-by-five meter (16.4-by-16.4 foot) paintings were created for the Salon des Tuileries in 1938 and have traveled outside of Paris for the first time for this Seoul exhibition.

“Delaunay later opened up the path to kinetic art with his colorful abstract paintings,” said director Seo. “This is a very educational exhibition in that it offers the chance for people to understand the whole cubist idea. This will be my last exhibition after 15 years of curating and I’m hopeful that people will find this one memorable.”