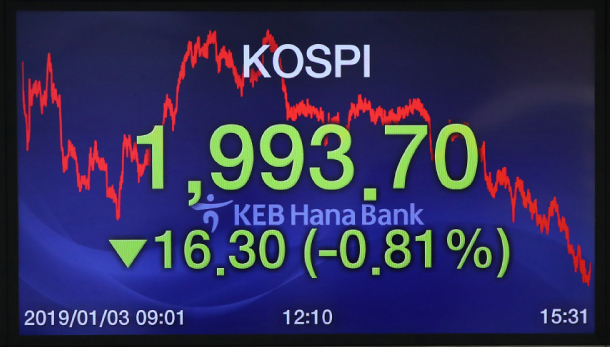 The benchmark Kospi index closed at 1,993.7 points on Thursday. [YONHAP]

Apple’s slashing of its revenue and earnings guidance for the first quarter sent a shockwave to Korean stock markets on Thursday, prompting the main Kospi bourse to dip below the psychologically significant 2,000 level.

The Kospi closed at 1,993.70, down 16.3 points, or 0.81 percent, compared to the previous trading day, affected by the plunging prices of local tech heavyweights such as Samsung Electronics and SK Hynix. Yesterday’s close was the lowest since Dec. 7, 2016.

Apple cut its revenue guidance to $84 billion, down from a range of $89 to $93 billion it previously predicted. The company also trimmed its gross profit margin prediction to approximately 38 percent from between 38 percent and 38.5 percent.

The U.S. smartphone manufacturer blamed an economic slowdown in emerging markets like China and a trade row between the United States and China.

Market bellwether Samsung Electronics was already seeing its shares weaken due to negative prospects for both the semiconductor and smartphone industries. It lost 98 trillion won in market capitalization last year, one of the biggest losers on the Kospi.

The tech company also saw a steep decline in sales and market share in China, due primarily to an economic slowdown and stiff market competition there.

Samsung said last year that it would stop operations at one of its mobile phone manufacturing plants in China.

Lee Jin-woo, an analyst at Meritz Securities, attributed the recent plunge in stock markets to concerns over weak corporate earnings.

“In September through October, the market experienced a correction because of the uncertainties surrounding macroeconomic conditions, which stem from a trade war between the United States and China,” Lee said, “But entering December, earnings prospects have emerged as a key factor.

“A series of deteriorating earnings prospects that happened rather swiftly hurt investor sentiment,” the analyst said.

In the first trading day of the year, the Kospi declined 1.52 percent primarily over concerns that China’s growth could slow.

The downbeat start to the year came after a weak December in which stocks were pulled down by volatile global markets. Major financial institutions including the International Monetary Fund and the Bank of Korea warned of a tough 2019.