PARK HYUN-YOUNG
The author is head of the global economic team of the JoongAng Ilbo. 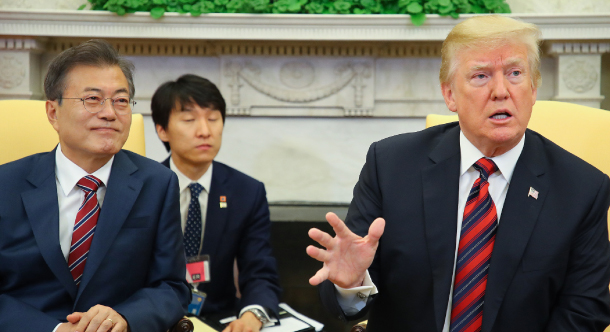 U.S. President Donald Trump abruptly proposes a press conference during his one-on-one summit with Korean President Moon Jae-in at the Oval Office in May 23, 2018. [YONHAP]

The U.S. President doesn’t seem to have a special way to spend the end of the year. Like everyone else, he does what he likes with people he likes. U.S. President Donald Trump concluded the year with an interview with Fox News, which he adores. The interviewer was a host who is close to Trump.

Trump is known for his special affection for Fox News. He records and watches it, and his morning tweets are often about Fox News articles. He often has interviews with Fox. In the 23 months since his inauguration, he has had 41 interviews with Fox News, an average of 1.7 per month.

Fox asks easy questions to answer and does not investigate his remarks, so it is only natural that Trump prefers Fox. The right-wing cable television news channel is an effective way to deliver messages to his supporters. Trump doesn’t get along with mainstream media, so it’s inevitable that he spreads his administrative philosophy on Fox.

But it doesn’t mean Trump excludes media critical to him. He has had one-on-one interviews with the New York Times, which he called “failing,” and the Washington Post, which he claimed produced fake news for Amazon. Other mainstream media, such as the Wall Street Journal, AP, Reuters, CBS and ABC, have had interviews with Trump. Local radio morning talk shows also had a chance. Last year, Trump had 70 media interviews, an average of one every five days.

You are mistaken to think that the reality TV show star likes media exposure. Former President Barack Obama was the true king of communication, having 187 interviews in the 465 days after his inauguration. In the same period, Trump had 95 interviews. Political scientist Martha Kumar traced the media exposures of six former and current presidents since Reagan. Trump had more Q&As with White House pool reporters at the White House garden or before boarding Air Force 1 than Obama. Trump had 170 Q&As, Obama had 55.

Regardless of a president’s preferences, contact with reporters is considered a duty. Trump made the term “fake news” popular and defined the media as the enemy of the people, but he still gives interviews. Last year, Trump mentioned “fake news” 174 times on Twitter. But he gladly sat with the fakers and enemies because he is the president. Kumar said that interviews are a symbol of an administration’s transparency.

But Trump ignored one media outlet completely: CNN. In a recent press conference, he said that he would not take questions from CNN reporters and was criticized for behaving like a dictator.

President Moon Jae-in has not had an interview with local media outlets in 19 months in office. I hope this changes in the new year.