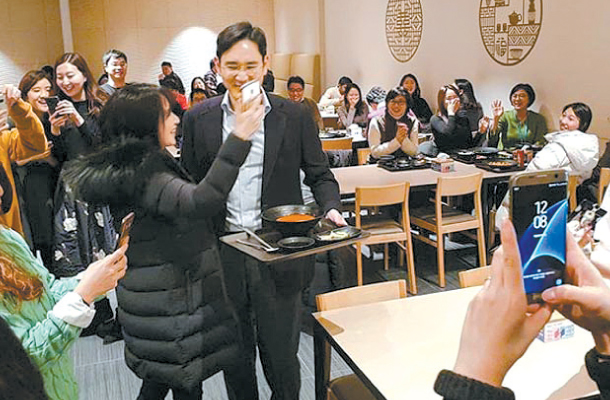 Samsung Electronics Vice Chairman Lee Jae-yong’s first appearance in the field this year was to celebrate the start of production at a 5G network equipment factory Thursday.

His field visit comes as the company puts more weight this year on the 5G network-equipment business, which involves components used in 5G networks. These components are supplied to telecommunications companies.

Lee and several other top executives, including Koh Dong-jin, CEO and president of the IT & mobile division, were present at the celebration ceremony held at the company’s factory and office complex in Suwon, Gyeonggi.

“The 5G market is a new field, and we have to build competence with the mindset of a challenger,” Lee told employees during the event.

Lee and the team of executives stopped by the cafeteria of the complex for lunch, resulting in posts on Instagram featuring Lee and employees.

The manufacturing line for 5G equipment in Suwon is the first in the industry to be designed using “smart factory” principles. It utilizes 5G connections to enhance productivity and reduce the rate of defects.

The company originally manufactured 5G network equipment in Gumi, North Gyeongsang, but had the production line relocated to Suwon, the site of its R&D center. This was done to help create synergies between the manufacturing and R&D facilities, said a spokesman.

Samsung signaled last August that 5G connectivity is one of its four growth engines for the future when it announced a plan to invest $161 billion by 2021.

The business area is receiving considerable attention from global technology companies. 5G connectivity is vital not only to telecommunications in the future, but will also be an essential component of other, related state-of-the-art technologies, such as autonomous cars, AI-powered robots and virtual reality.

Samsung’s presence in the global telecommunications equipment market is relatively low, with a share of around 11 percent for fourth-generation LTE equipment, according to market research firm Dell’Oro. The larger players include Huawei, Ericsson and Nokia, all with shares of more than 25 percent.

The company’s current goal is to hit a 20 percent market share in the 5G equipment market next year.

Samsung has been expanding its client base for 5G equipment mainly in Korea and the United States. Names on the list include SK Telecom, KT, AT&T and Verizon. Samsung hopes to leverage those client relationships to attract other customers.

The company plans to release the Galaxy S10 in March. It will be its first smartphone to support 5G connections.

Kim Young-ki, Samsung’s president of network business, said at an event last November that the company will invest a total of $22 billion to develop 5G-network technology.