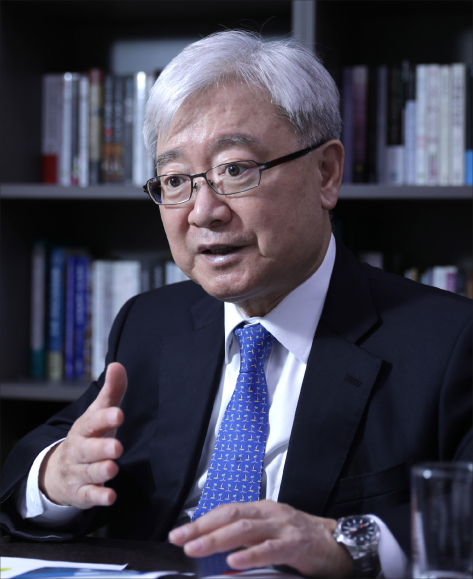 Kim Seok-dong, a 65-year-old former chairman of the Financial Services Commission, is the best example of a classic economic official who has handled all sorts of issues during times of economic crisis over the past 30 years. He was often called a “firefighter” or “relief pitcher.” Whenever a rumor about a cabinet reshuffle circulates, the reason why he is mentioned as one of the most likely candidates is because of the extraordinary leadership he has shown during hard times.

Kim is making headlines these days as he recently published his book “Searching for the DNA of Korean People,” which traces the origin of Koreans. The book was released after a decade of field research of a 50,000 kilometer-long (31,068 mile-long) area of Central Asia. With its massive amount of evidence, the book sheds light on the connection between the origins of the Korean people and northern horse-riding people.

The interview, following a series of rejections, was conducted on the condition that the current government’s economic policies were not discussed.

Q. What is the book about?

A. Since the 1960s, the world economy has grown 7.5 times, but during the same period, the Korean economy has grown 40 times. Compared to other developed countries, its pace is overwhelmingly fast. Korea, as you can see, has made a miraculous achievement for half a century and became the 11th biggest economy in the world. As an economic official, I have always been curious about how Koreans accomplished this miracle and the driving force behind it. This book started as I tried to find the answer. After speculation, I found my own answer. The keys were Korea’s unique market-opening strategy, which put exports on the front lines, and the DNA with which Koreans’ unique temperament is embedded. Thanks to this DNA, within less than 60 years, Korea became a great economic power in the world.

Is that the reason why you named your book “Finding the DNA of Korean People”?

The characteristics of Korean people can be categorized into four parts: relentless survival instinct, adventurous spirit, strong will for connectedness in a community and pioneering spirit. The characteristics are unique, as they can barely be found in other ethnic groups, but I found out that they are extremely similar to the temperament of horse-riding people who fought in wars and dominated the Eurasian continent 2,500 years ago. We have misunderstood horse-riding people — who were called the Huns, Xianbei, Göktürk, Mongols or Jurchen according to the era in which they lived in — as barbarians from the North. However, they maintained a mighty empire for 700 to 1,400 years. The similarity between the Korean people and horse-riding people in a great number of relics and lists of books as well as culture, language and custom show that there is a kinship between the two.

What was the most impressive relics when you carried out your field research?

It was when I visited the Hongsan area of the Gulf of Bohai, where many ancient relics remained. There, I heard something shocking. I ran into a neighborhood where ancient graves were dispersed around the area. An old villager in the neighborhood pointed at those graves and said it is “kaorimoo.” Goryeo refers to Goguryeo, so these graves stacked up with stones are not owned by Han people, but it was owned by northern people like Korean people. This shows that the culture of northern people, including Korean people, flourished here for a long time.

You have been busy as an economic official, so when did you become interested in history?

Since I was young, I have always been interested in history. I wanted to be an archeologist like Heinrich Schliemann, who excavated the remains of Troy. I planned to major in history in college, but due to my parent’s strong suggestion, I majored in business administration and followed the path of a government official. Even when I worked as an official, I collected over 1,000 books and always maintained an interest in the history surrounding us.

Your analysis of Korea’s unique economic achievement is unique. Let’s talk about the future now. Do you think that the Korea economy can persist and survive?

Following next year, the world economy will be worse. Since the financial crisis in 2008, the recession is an ongoing crisis in the world. The Great Depression in 1929 resulted from a simple cause — lack of demand. However, the crisis after 2008 resulted from high debt. The debt accumulated over and over again, and it finally exploded in 2008. At that time, although we encountered a deadlock of debt, we were able to get away with it because we put the debt aside and lowered the interest rate. The trade war between the United States and China will trigger the incoming crisis.

What are your prospects on the trade war between the United States and China?

I vividly witnessed this when I was a deputy director in charge of the Plaza Accord in 1985, which led to the appreciation of the yen. The exchange rate fell from 250 yen a dollar to 80 yen a dollar. Although Japan immediately succumbed to the pressure of the United States, it experienced a lost 20 years afterwards, and a long-term recession followed. The U.S.-China trade war was meticulously prepared since the Obama administration. Trump merely pulled the trigger. The repercussions will last long in that it is a war carefully designed by international powers.

It is depressing to hear that. In this tight spot between China and the United States, how can we find our own way to survive?

The domestic situation is not good either. Household debt, the loss of [Korea’s] competitive edge, low birthrate and aging society and unemployment among the younger generation are all intertwined, causing imbalance and conflict. The Korean economy has run a long race [in the same way it would] run a short race, so now it is out of breath. It needs a moment to breathe and rest.

What momentum do we need to overcome this crisis?

If you draw a line from the major production bases of the world, including the United States, Japan and China, the Korean Peninsula is in the center. The Korean Peninsula is located in a geographically important place that has the potential of becoming the best logistics place, as well as production base, in the world. We need to have a new perspective. We need to make a creative and revolutionary production method that we have never tried before.

A train which took off at Busan can go to Europe via Russia’s Trans-Siberian Railway. A great logistics line from Mokpo to Europe via Sinuiju, North Korea, and China can be realized on the Korean Peninsula. This kind of daring plan can definitely be the new method. The joint development of the borders of North Korea, China and Russia is worth consideration. The three countries can put out the land, and South Korea, the United States and Japan can join and build an international city. It is this method of sharing the land together that works. And it is due to the cooperation from international communities that it could be an impetus for overcoming the economic crisis. Our fate depends on this.

We need to ask you about the pending economic issues. What is the most urgent issue in the Korean economy?

The government should restructure industries fast as possible in preparation for the freeze-up in the future and develop new industries. The government should also introduce competitive elements in industrial fields that have monopolistic structures and needs to come up with a policy to boost the component industry rather than [those that produce] complete products. It ought to revamp the industry structure so it can see the future ahead. The only entity that can create a new playing field is the government.

Do you think the current government is running the economy well?

But there are controversies in relation to the government’s current economic policy.

When you say the economy is bad, it should not be a source of political fighting but a standard of judgment. We are now experiencing the aftermath of extremely rapid growth. We should not blame everything on the government’s policy but rather consider other external factors.

What do you think about income-led growth?

We should not perceive income and growth as only a cause and effect relationship. Capitalist economies are so complex that sometimes the result influences the cause. Rather than trying to find out what comes first, what is important is whether it is valid or not. I have implemented economic policies for 35 years, but reality does not always comply with the theory.

Many people criticize the government for putting too much energy into dampening companies’ spirit.

(Pausing for a moment) Solving the distorted problem between conglomerates and small- and medium-sized companies is necessary and desirable. However, we should avoid losing balance or weakening entrepreneurship. Things that need to be fixed should be fixed, but destroying all existing things is unwise. The key to Korea’s success was letting companies do what they wanted to do. Let the companies do what they want to do.

Do you mean the government should directly intervene?

What I am saying is that when overcoming a crisis, adequate measures should be followed. That is the role of the government. The problem is that the government does not know whether it is approaching a crisis or not.

You are mentioned whenever the cabinet is reshuffled.

From now on, I will never go back to being an official. I want to dig deeper into the trajectory of the Yi. I feel sorry for the younger generation who call its own country “hell.” I want to inform the generation about how great our country and our DNA is in order to become a world-class citizen competing in this world.