Trump gushes over Kim’s letter to him

Trump gushes over Kim’s letter to him 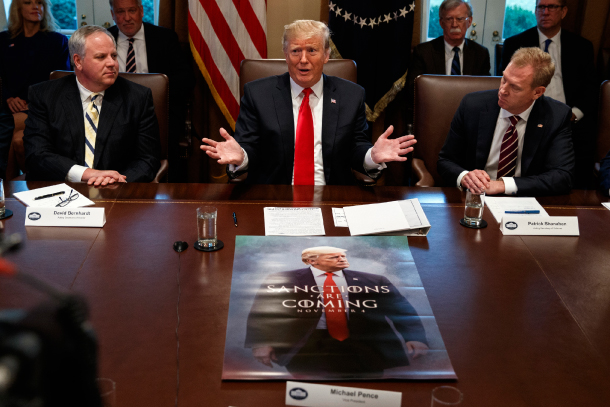 U.S. President Donald Trump, center, displays what appears to be a three-page letter from North Korean leader Kim Jong-un during a cabinet meeting at the White House on Wednesday. Without elaborating on its contents, Trump said he looks forward to meeting with Chairman Kim in the not-too-distant future. A poster reading “Sanctions are Coming November” was put on the desk in front of Trump. Acting Secretary of the Interior David Bernhardt, left, and acting Secretary of Defense Patrick Shanahan, right, listen to Trump. [AP/YONHAP]

U.S. President Donald Trump said that he is ready to help North Korea reach its “tremendous economic potential” after revealing Wednesday at the White House that he received a letter from the North’s leader Kim Jong-un.

“I just got a great letter from Kim Jong-un,” Trump told reporters at his first Cabinet meeting of the new year. He displayed what appeared to be a three-page letter without elaborating its content, which he said he has shown to only a “few people.”

In his New Year’s address Tuesday, Kim said he is ready to meet with Trump again “anytime.” Kim reiterated his commitment to “complete denuclearization” and pledged that North Korea will not make, test, use or proliferate nuclear weapons.

“We had our meeting six months [ago] in Singapore,” said Trump, recalling his first summit with Kim on June 12. “We’ll probably now have another meeting. He’d like to meet, I’d like to meet.”

“I look forward to our meeting with Chairman Kim,” said Trump. “We’ll be setting it up in the not-too-distant future.”

Trump did not elaborate on how the letter from Kim was conveyed to the White House. However, this letter diplomacy between Trump and Kim played a substantial role in moving along behind-the-scenes planning for the first summit. It has since served as an opportunity to build trust between the two leaders, especially when lower-level talks have stalled.

“They’ve never written letters like that,” Trump said. “We’ve made a lot of progress with North Korea and Kim Jong-un.”

While denuclearization talks have been at a deadlock, there has been continued communication behind-the-scenes between the United States and North Korea. Trump said that he and Kim have “established a very good relationship.”

Trump also appeared to acknowledge Kim’s ambition for the economic development of his country, a key policy the North Korean leader prioritized in his New Year’s address. The North’s economic development is currently being hindered by the international sanctions campaign against it. In his speech, Kim also warned against continued strong U.S. sanctions on his country, as Washington is maintaining its strong economic pressure on Pyongyang.

“We have somebody that I really think wants to get on to economic development and making a lot of success and money, frankly, for his country,” Trump said on Kim. “North Korea has tremendous potential, and we’ll help them out too.”

During the Cabinet meeting, Trump had a poster on his desk that featured a photo of himself that read: “Sanctions are coming,” apparently a reference to the HBO television show “Game of Thrones.” The poster previously appeared last year when the administration planned to re-impose sanctions on Iran after Washington withdrew from the 2015 nuclear deal with Tehran.

Trump further added that he is not looking for “speed” in nuclear negotiations, words that could help assure Pyongyang. Officials in his administration initially floating the notion that North Korea’s denuclearization should occur by the end of Trump’s first presidential term early next year.

“I’m not in any rush,” said Trump. “All I know is there’s no rockets, there’s no testing.”

He pointed out that the alternative to the current denuclearization talks led by his administration and the North could have been a “nice big fat war in Asia.”

“That could have been a World War III, to be honest with you,” Trump said. “A lot of people would have to get involved in that all over Asia, then it spreads beyond Asia.”

In a turnaround from a year ago, when Trump threatened nuclear war with North Korea, he said that, “Instead of that, we’re getting along fine.” For a second Trump and Kim summit to proceed smoothly, diplomatic observers have pointed out that North Korea and the United States still have to reach a compromise. Pyongyang is calling for sanctions relief and economic support in return for its steps toward denuclearization.

Even while pointing out that “a deal’s a deal,” Trump said. “They really want to do something.”

“I was watching PBS, and they really covered it accurately,” said Trump. “They said that in Chairman Kim’s speech, he really wants to get together, he wants to denuclearize and a lot of good things are happening.

Kim Eui-kyeom, South Korea’s Blue House spokesman, said in a briefing Thursday that, “We look forward to Chairman Kim Jong-un’s letter playing a positive role in enabling the complete denuclearization and the establishment of permanent peace on the Korean Peninsula.”