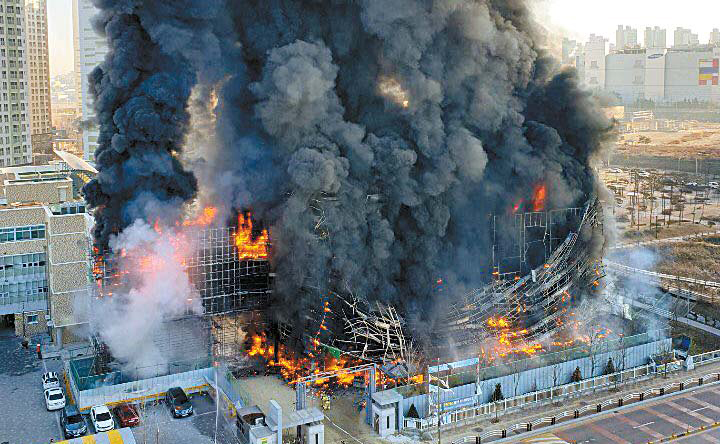 Chaam Elementary School, located in Cheonan, South Chungcheong, burns on Thursday. All faculty members and students in the building were safely evacuated in less than five minutes. The fire, reported at 9:31 a.m., was put out 40 minutes later. [NEWS1]

Flames engulfed Chaam Elementary School in Cheonan, South Chungcheong, on Thursday while classes were in session, but no one was injured after school administrators correctly followed evacuation procedures.

The school’s staff members and students, around 850 in total, were able to escape from the school safely in less than five minutes. The cause of the fire has not yet been announced by authorities.

The fire was first witnessed by Yoo Yong-gwan, the chief administrator of the elementary school. Yoo was on the school’s rooftop to check on construction work when he witnessed flames and smoke coming from the site. He immediately ran down to the principal’s office to tell school officials about the fire and then went into the teacher’s office to call 119.

Vice principal Kim Eun-suk, who was in the office when Yoo came down, used the school’s intercom system to notify the teachers and students about the fire. Kim then asked teachers to help evacuate students by guiding them towards the back entrance of the elementary school. Kim made sure that faculty members and students understood that this was a real situation.

Yoo and five other administrative employees then, as they practiced, pushed the emergency bell that notified the nearest fire department of the fire. Afterwards, all six visited each classroom to make sure that everyone was evacuated. They did not have to spend time traveling to the adjacent building where kindergartners had their classes because they were on winter break. Winter break for elementary school students was scheduled to start on Jan. 9, which was why they were present in the building.

Students and faculty members followed the exact procedures they had practiced with for every fire drill. In five minutes, everyone present in the building was able to escape to the designated evacuation shelter, which was a community center in the basement of an apartment complex near the school.

“I am just so thankful that everyone was able to evacuate the scene without anyone getting hurt,” said Jeong Eun-yeong, the principal of Chaam Elementary School. “I send special thanks to all faculty members and administrative office employees who helped evacuate the students.”

The fire, first reported at 9:31 a.m., was completely put out about 40 minutes later. Police and fire department officials announced they will be looking into the testimonies of construction workers on the scene who said they saw nearby Styrofoam catching on fire.