For Kia Tigers pitcher Yang Hyeon-jong, 2018 was a disappointment. 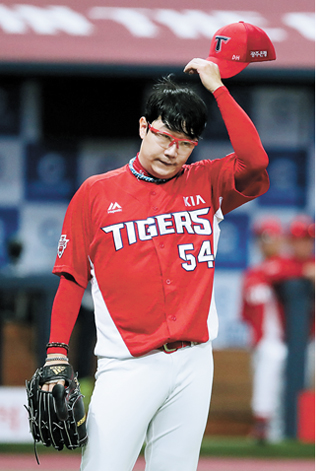 Yang Hyeon-jong of the Kia Tigers reacts during the wildcard game against the Nexen Heroes at Gocheok Sky Dome in western Seoul on Oct. 16. [NEWS1]

Yang finished the 2017 season with the world at his feet. After leading the Tigers to victories in both the regular season and Korean Series, he became the first player in the KBO to win every single major award in one season. Throughout 2017, Yang picked up 20 wins and six losses with a 3.44 ERA.

“I have a lot of disappointments,” Yang said. “I self-reflected.”

It’s not only Yang’s ERA that has suffered. Yang also has an impressive record when it comes to the number of innings pitched. Since the 2014 season, Yang had been tossing more than 170 innings a season. In the KBO, Yang tossed the most innings in the last five seasons, a total of 933 and two-thirds of an inning. After Yang, Doosan Bears’ Yoo Hee-kwan is second at 882 and one-third of an inning.

The Tigers scraped into the postseason after finishing fifth in the league, but were quickly eliminated when they lost the wildcard game to the Nexen Heroes. As Yang was a veteran on the team, he felt a bigger responsibility for the club’s disappointing season.

“We talk by the results,” Yang said. “Personally, I played bad. It was a season when I have had to self-reflect a lot.”

It wasn’t the best season for Yang, but he still fulfilled his role as the Tigers’ ace pitcher. Last season, he tossed 184 and one-third of an inning, the second highest in the league. In addition to the games he played for the Tigers, Yang had no time for a break as he competed at the 2018 Asian Games.

As Yang was well aware of the situation, he returned to the team for the wildcard game. Although he gave up three hits and four runs in four and one-third of an inning with a 0.00 ERA, the continuous errors by fielders left the Tigers facing elimination. The Tigers lost the game 6-10.

This season, Yang will once again face a tough challenge. As the Tigers failed to re-sign their foreign pitchers - Hector Noesi and Pat Dean - they brought in new foreign pitchers - Jacob Turner and Joe Wieland. Due to this, he is once again given high expectations this season to perform and to lead new players.

“The facilities at our home stadium, Champions Field, are well equipped and open all the time,” Yang said. “I’m going to start training in January. Next season, I want to pitch more innings without getting injured. I’ll have to be better than 2018.”