YUN SEOL-YEONG
The author is a Tokyo correspondent of the JoongAng Ilbo. 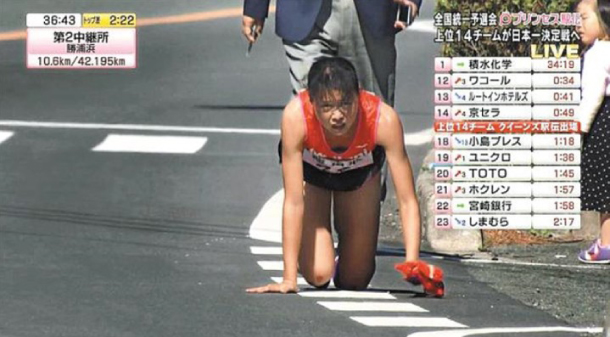 In a relay marathon in Fukuoka last October, a peculiar incident happened. A 19-year-old runner fractured her leg, and as she couldn’t run any longer, she crawled the last 300 meters. Her knees were bleeding as she was on an asphalt road, and it was broadcast live nationwide.

She claimed that responsibility made her finish the race, but to me, it seemed like a reckless challenge to keep the “promise” to do her best in the section she was supposed to run. It made me feel that to Japanese people, a “promise” is something so fearful that one must keep it.

From the beginning of the year, Japanese Prime Minister Shinzo Abe stressed “a country that abides by rules.” He appeared on a radio program and slyly mentioned Korea as a country that doesn’t abide by the rules. The host noted that Japan keeps the rules and that it must be hard to deal with countries that don’t. Abe said that the reputations of the countries that don’t abide by rules would be diminished, and they would suffer economically. In the question and answer session, they appeared to be discussing the Korean Supreme Court’s decision on forced wartime labor by Japan.

I recently met with a Japanese diplomat in charge of Korean affairs. He talked about the differences in perceptions. He said that the Korean word for “correct” cannot be properly translated into Japanese. “Tadashi” doesn’t accurately capture the meaning, he said.

To Japanese people, “correct” means following the set standard. If there is an agreement or promise, the correct way is to be followed. But in Korea, “correct” is a more flexible concept. “It was right before, but not right now.” The Korea-Japan comfort women agreement and the Supreme Court’s decision on forced labor by Japan are such cases. “Correcting history” doesn’t exist in Japan. They would have to say “rebuilding history.”

Efforts need to be made to understand each other and narrow the difference, but I am worried this is not happening.
What I am wary of the most is the negligence that it is the nature of the Korea-Japan relationship.

The position that “Korea-Japan relations have never been good, so it is okay to be uncomfortable” sounds like diplomacy is not needed.
I hope to see visible efforts on both sides in the new year.