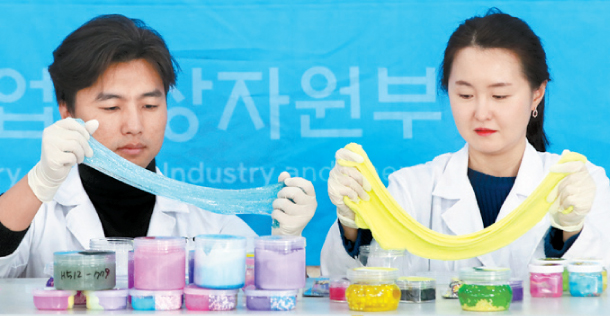 On Wednesday, Seoul National University scientists from the school’s Institute of Health & Environment wrote in a scientific journal that 25 out of 30 slime toys they analyzed were found to contain boron levels that exceeded the European Union limit of 300 milligrams per kilogram (2.2 pounds).

The 25 products were found to contain around 1,000 milligrams per kilogram on average, while one product was found to exceed the limit by seven times.

While boron, which gives slime its gooey consistency, is naturally found in food like nuts and used in medicine, high doses or exposure may lead to possible disruptions in metabolism, stunted development and infertility.

There are currently no domestic regulations on boron limits in toys.

The new findings are throwing parents into a panic, given slime’s massive popularity. Videos of Korean YouTubers playing with slime have garnered millions of views, while over 100 slime cafes have also popped up.

“My kids are already obsessed with slime toys,” wrote one mother in a blog on Thursday. “We need regulations quickly, but nothing is being done.”

“I banned slime from our home some time ago,” wrote another. “Though my kids like them, the slime toys are just balls of germs that my kids touch over and over again, absorbing the bad chemicals into their hands.”

This is not the first time that slime has been under fire for containing hazardous substances. Last year, the Korean Agency for Technology and Standards found that 76 of 190 slime products it tested contained unsafe substances including methylisothiazolinone and chloromethylisothiazolinone, which can cause respiratory issues.

The agency has since ordered a recall for the unsafe products.