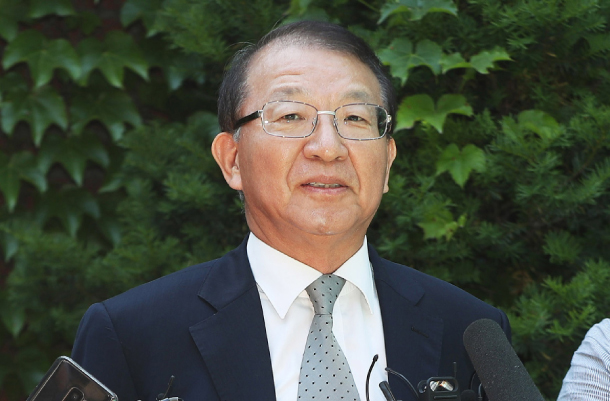 Former Supreme Court Chief Justice Yang Sung-tae will be summoned by prosecutors next week to be questioned over alleged collusion with justices and lawyers to influence politically sensitive trials to curry favor with the Park Geun-hye administration.

Yang will be summoned at 9:30 a.m. on Jan. 11, the Seoul Central District Prosecutors’ Office said on Friday.

The case dates back to June 2017, when 100 judges representing courts throughout the country gathered for a national meeting of judges and called on Yang to resign over his alleged abuse of power. They said Yang abused his power via the administrative body of the Supreme Court, the National Court Administration (NCA), to stall judiciary reforms and even create a blacklist of judges based on their political persuasions.

After Yang completed his tenure, Kim Myeong-su took over as chief justice and ordered an internal investigation into the allegations.

According to the probe’s report in January 2018, there was no actual blacklist. But the NCA had created reports in 2015 and 2016 that could have violated the independence of judges, particularly those who were members of a liberal research group.

The probe also unearthed many documents written by the NCA during Yang’s reign that raised concerns about violations of judicial independence. Some included directives to curry favor with the Park administration, such as, “Regarding cases that may have strong national or societal influences, or are about sensitive political issues, communicate with the Blue House unofficially, and in advance, to make sure that the Supreme Court does not dole out unexpected rulings.”

Prosecutors took up the investigation in June 2018 and looked into some of these cases that Yang may have used as bargaining chips to curry favor with the Park administration.

They include the suits filed by Korean plaintiffs against Japanese companies that forced them into labor during World War II. Yang is alleged to have met with at least one lawyer of Kim & Chang, the largest law firm in Korea, to delay the damage suits.

The firm represented Japanese companies in a handful of forced labor trials that were under judicial review from 2012 onwards. Five of these were delayed in the Supreme and High Courts starting in 2013.

Prosecutors found an order by President Park to the Foreign Ministry in April or May 2016 to communicate with the Supreme Court to delay the rulings. At the time, Park’s administration was planning to set up a foundation with Japan to settle the so-called comfort women issue in June 2016.

It took Park’s impeachment and removal in 2017 and a change in leadership in both the country’s executive branch and judiciary for the Supreme Court to finally rule on the forced labor case. On Oct. 31, 2018, the court ordered Japan’s Nippon Steel & Sumitomo Metal to compensate four Korean plaintiffs. Nearly all of the original plaintiffs have passed away.