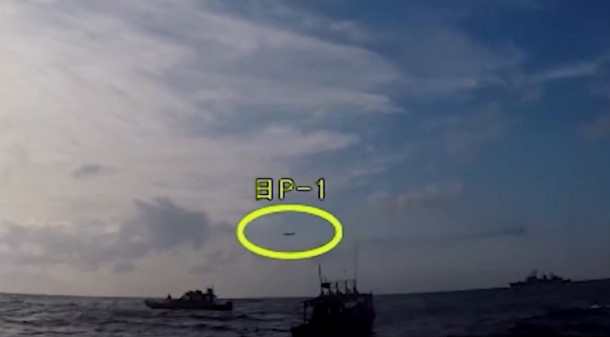 Japan’s patrol plane, in circle, flies at low altitude near the Gwanggaeto the Great destroyer in a video South Korea’s Defense Ministry released on Friday to repudiate Japan’s claims in a spat involving military radar. [YONHAP]

South Korea on Friday released its own video to repudiate Japan’s claims over a spat involving military radar and renewed calls for Tokyo to stop distorting facts and to apologize for the incident.

Seoul’s Defense Ministry posted the video clip on YouTube a week after Tokyo released its own footage to back up the claim that a South Korean warship had locked fire-control radar on its maritime patrol aircraft on Dec. 20.

In the clip, the ministry reiterated that its 3,200-ton Gwanggaeto the Great destroyer did not target Japan’s Maritime Self-Defense Force’s P-1 plane, as the vessel was focused on a humanitarian mission to rescue a North Korean boat in distress in the international waters of the East Sea.

The ministry also reiterated that the Japanese plane was flying at low altitude, which was “threatening” to the destroyer.

“The release of our video clip is designed to provide accurate facts, after distorted facts have been disseminated to Internet users across the globe through Japan’s clip unilaterally published in Japanese and English,” Choi Hyun-soo, the ministry’s spokeswoman, said.

“We once again say that Japan must cease actions that warp the facts and apologize for carrying out a low-altitude flight toward our warship that was on a humanitarian rescue operation,” she added.