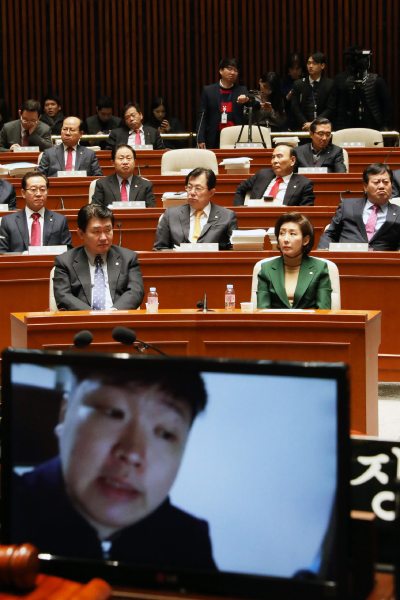 Lawmakers from the main opposition Liberty Korea Party watch the video uploaded on YouTube by Shin Jae-min, a former government official who blew the whistle on the Finance Ministry, in the National Assembly, western Seoul, on Friday. [NEWS1]

Friends of the Finance Ministry’s whistle-blowing ex-bureaucrat who tried to commit suicide on Thursday morning released a joint statement that night imploring the government not to engage in a legal battle with him and start real discussions on cleaning up the bureaucracy.

A group of Korea University graduates who introduced themselves as former members of a teaching club that included Shin Jae-min said in a letter issued to local media outlets Thursday night that they expected better from the Moon Jae-in government.

“A former deputy director is no match to a government,” wrote the group. “Instead of fighting [against Shin], we hope [the government] tries to listen to what he has to say. If he’s the one who got it all wrong, we want [the government] to sufficiently tell him [the truth] and explain [the situation] to him.”

The former club members who said they used to teach alongside Shin at local night schools for underprivileged children described the whistle-blower as a passionate and pure-hearted educator who gave his all fighting social injustice.

All Shin ever wanted, they continued, was for the Moon administration to be better, which is why he thought his whistle-blowing would be of help. He believed the government would understand his actions, unlike the right-leaning Park Geun-hye government, which attacked whistle-blowers.

“It’s a naive thought, and one that could be considered thoughtless,” said the Korea University alumni. “But that’s the kind of friend Shin Jae-min was.”

Shin’s friends urged the government not to press serious charges against the 32-year-old for blowing the whistle on the Ministry of Economy and Finance and the Blue House, adding they hoped Shin’s case paved the way for a serious debate on ways to improve the system and structure of Korean governance.

In a separate letter attached to the joint statement on Thursday night, Shin’s parents apologized to the general public, government and Minbyun-Lawyers for a Democratic Society for causing trouble, and thanked police officers and firefighters for rescuing Shin earlier that day from hanging himself.

“Jae-min is really soft-hearted, and he’s been under great pain thinking he inflicted harm upon the people around him, which was the opposite of what he intended,” Shin’s parents wrote. “He did what he personally thought was right, and he showed a lot of courage, but things got out of hand and his stress levels got really high,” his parents wrote.

They said they would help their son faithfully respond to investigative procedures in the future, referring to the Finance Ministry’s recommendation that Shin be indicted for leaking confidential information about his time in the government.

Shin was the second whistle-blower to take on the Moon administration and Blue House last month when he accused the presidential office of trying to change the chief executive of Korea Tobacco & Ginseng (KT&G) and local newspaper Seoul Shinmun, despite the fact they are both private sector companies. Shin also claimed that the Blue House forced the Finance Ministry in late 2017 to issue 4 trillion won ($3.6 billion) worth of deficit-covering bonds despite opposition from the ministry, to make the former Park government look inept in fiscal governance.

The Finance Ministry denied those allegations and asked prosecutors to prosecute him.

Shin, a Korea University graduate who passed the civil service exam in 2012, officially started his public service career in 2014 as a fifth grade official in the country’s nine-rank public servant system.

The ex-bureaucrat, who left the civil service last July, went missing for hours on Thursday after leaving a suicide note on the internet that said he was going to hang himself in a motel. Police found him alive. Shin was initially hospitalized at the SMG-SNU Boramae Medical Center in Dongjak District, southern Seoul, but was transferred to the Seoul National University Bundang Hospital at around 6 p.m. on Thursday.

Shin is currently being treated in a general ward, but neither the police nor hospital explained Shin’s state of health or why he was moved to another hospital. Democratic Party Rep. Sohn Hye-won faced public scrutiny Wednesday when she wrote on Facebook that Shin was trying to make money and that it was “despicable” seeing him pretend to be a righteous person despite having a “bad brain.” Sohn deleted the post Thursday morning shortly after local media reported Shin had gone missing after leaving a suicide note.