[CAPITAL CONNECTIONS] Korea and the EU ski the slopes of diplomacy

[CAPITAL CONNECTIONS] Korea and the EU ski the slopes of diplomacy 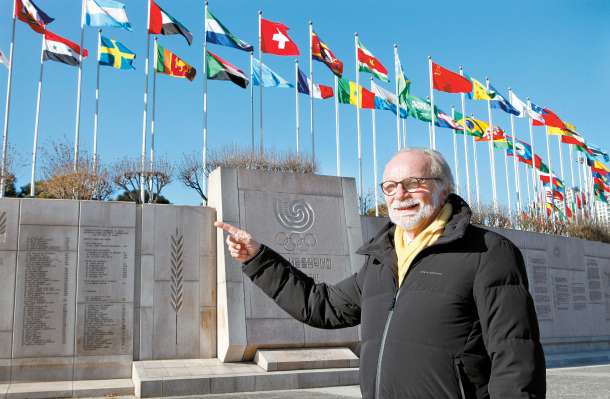 Ambassador of the European Union to Korea Michael Reiterer at Olympic Park, southern Seoul, on Dec. 28. The park holds venues that were used for the 1988 Summer Olympics, the first Olympics hosted by South Korea. [PARK SANG-MOON]

Left: Michael Reiterer, right, and his wife Norgart Reiterer, at their residence in central Seoul on Dec. 28. Right: Ambassador Reiterer with Claudia Losch, an alpine skier from Innsbruck and winner of five Paralympic medals, at the 2018 PyeongChang Winter Paralympics in Gangwon. [PARK SANG-MOON, MICHAEL REITERER]

In the 1964 Olympics in Innsbruck, the first Games held by the Austrian city, then-divided Germany came together to form a united team.

History seemed to repeat itself when around half a century later, athletes from the only remaining divided country in the world walked into a stadium in South Korea under one flag during the PyeongChang Olympics last year.

“Diplomacy is sometimes very much about symbols and that was a very strong symbol,” said Michael Reiterer, ambassador of the European Union to Korea. “There the two Koreas came with one flag and that’s the link I made with the 1964 Olympics when the two Germanys came together.”

Though the two Koreas have competed under a unified flag in the Olympics, they are yet to host one together. The first case may be in 2032, if the inter-Korean bid is successful.

The city government of Seoul has voiced its hopes to host it together with Pyongyang. For the capital city of South Korea, it would be the second time hosting the Games.

The 1988 Summer Olympics in Seoul is heralded internationally as a symbol of democratization and national growth.

“It makes it easier if the host city had hosted the Games before, but, of course, you have to modernize,” Reiterer said. “After 12 years, Innsbruck had to modernize the bobsled area and the ice stadium, and build a new Olympic Village, because the former one was being used as a residential space for locals.

“There was also more traffic in 1976, so we needed more infrastructures,” he said. “If you look at 2032 from the experience of 1988, there will be an accelerator in technology used and sports practiced comparable to the fourth industrial revolution where development is not linear anymore but exponential. So if you reuse the 1988 Olympics installations for an upcoming inter-Korean Olympics, if it is happening, then there will be a substantial need for modernization.”

The Seoul Metropolitan Government estimated it will need to spend some 1.15 trillion won ($1.02 billion) to host the Games in 2032, including the renovation costs.

Leaning back against a chair in his living room decorated with a Christmas tree and shelves abound with books — many of them Korean fiction translated into German or English — the ambassador delved into sports diplomacy and its implications for the EU, his home country and Korea. 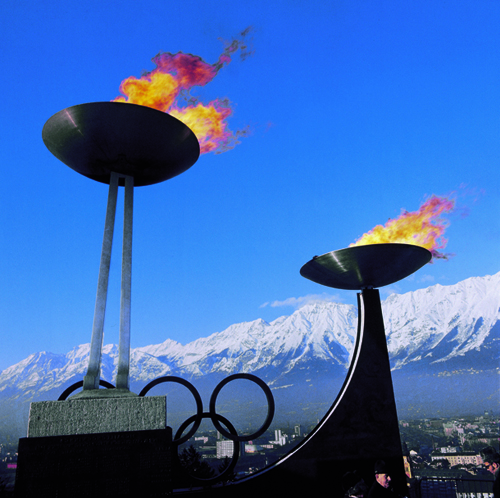 The flames lit at the two Olympic cauldrons at the 1976 Innsbruck Winter Olympics, which signified the history of the city hosting the Winter Games twice. [INNSBRUCK TOURISMUS]

Q. Why did you choose the topic of Olympics in comparing your home country to Korea?

A. There is the connection between the 2018 PyeongChang Olympics and the 1964 Innsbruck Olympics regarding the unified team from the two Koreas and the then two Germanys.

The 1976 Winter Games in Innsbruck also saw the first Winter Paralympics, though they were actually held in Sweden. In 1988, in Seoul, it was the first time the Paralympics were organized at the same venue as the Olympics.

And the obvious reason is that ever since the PyeongChang Olympics, Olympics were on my mind as a diplomat here because of the change between the North and South Korea.

How do you assess the PyeongChang Olympics’ impact on inter-Korean relations?

Political observers will agree that the physical attendance of high-ranking North Korean officials at the PyeongChang Olympics’ opening ceremony was an icebreaker in relations.

Diplomacy is sometimes very much about symbols and that was a very strong symbol. Furthermore, the two Koreas came with one flag and that’s the link I made with the 1964 Olympics when the two Germanys came together.

If there is crisis or tension, a lack of confidence will always hinder the discovery of a solution. Therefore building relationships is essential: and that’s where sports are very good means given they’re outside the realm of politics.

Can you picture sports diplomacy playing a similar, if not larger, role for what may be an inter-Korean 2032 Olympics?

[The Games in] 2032 are, of course, a long shot. For all we know, we are not sure what is going to happen even in 2019 or 2020. That it is being floated, however, is a positive development — a symbol of the two Koreas’ willingness of to do something together and to build a common future.

If the bid goes through, North Korea will likely insist that a lot of investment be done in the North because it will be a chance for them to get international investment. But everything is highly speculative. First, we have to solve the present impasse: achieve denuclearization to allow the lifting of sanctions. By 2032, sanctions will hopefully no longer be an issue anymore. 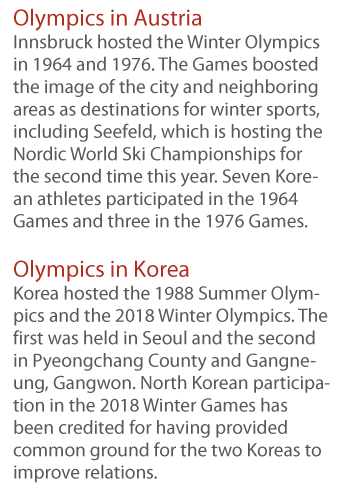 Tell us about the highlights from the two Olympics in Innsbruck.

Innsbruck is today well known because of the Olympics. The decision to host them in 1964 was a genuine one by Austria to showcase the country as an important winter sports destination. In 1976, Innsbruck stepped in because there was a negative referendum in Denver, which had been nominated.

The experience in Innsbruck was rather positive — lots of infrastructure was built, like the Olympic Bridge in the city, and neighboring areas— like Seefeld in Tyrol — got a big boost.

Seefeld became the capital of Nordic sports and they are organizing the Nordic World Ski Championships 2019.

What role did the EU Delegation in Seoul play in the 2018 Winter Games in Korea?

In discussing with my colleagues from the EU Member States, we decided to lend our support to the Paralympics as they are less in the limelight, but are important as they give sense and direction to many athletes, help them overcome their shortcomings. Paralympics also reflect the values the EU stands for, like inclusiveness, solidarity and non-discrimination, as people with deficiencies are part of our societies. They should not be left aside or hidden. We need to be reminded of this once in a while and the Paralympics are an excellent occasion.

During the Games, we invited students training to provide services for handicapped people to the Games to meet with the athletes. We also made a short film about it, organized seminars and invited journalists. I also wrote some articles about the Paralympics to raise awareness.

Ambassadors of the EU play a unique role in representing a group of countries. What has it been like for you?

The challenge is that the EU is not the United States of Europe. That means in representing the EU and its 28 Member States, I have to rely on common positions forged in foreign policy by consensus. Additionally, there are important policy areas — like trade and investment — where the EU is competent as the Member States have pooled their sovereignty. We coordinate closely and I meet my colleagues at least once a month to this end.

Serving in Korea at this time is a privilege — having witnessed the candlelight movement, the impeachment, the elections, the tensions with the North in 2017, followed by the turning point at the Olympics leading to an unprecedented summit. I hope to see further positive developments leading to a peace treaty based on denuclearization and a substantial improvement in the human rights situation, processes the EU would support wholeheartedly. This would be the crown jewel in 39 years of a diplomatic career. 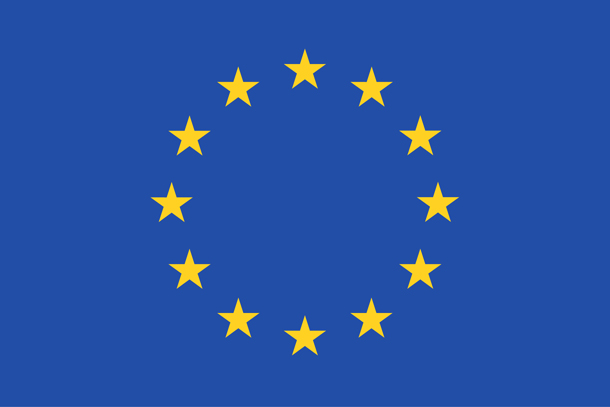 Skiing resorts in and around Tyrol

Ambassador Michael Reiterer, who has skied from an early age, recommends ski resorts in the Arlberg area in Austria, the Otztal with Solden, Obergurgl and Kuhtai, Fiss & Serfaus & Ladis and the Zillertal. For cross country skiers, he recommends the Seefeld area, which is very close to Innsbruck and is excellent for long winter hikes. In Switzerland, where he served as the first EU ambassador, skiing is great in Zermatt and Grindelwald, and in France, skiing areas with high quality snow can be found at Tignes, Val d’Isere, Meribel, Courchevel, Avoriaz and Les Portes Du Soleil.

Michael Reiterer has been representing the EU in Seoul since 2017. The top envoy was previously the principal adviser in the Asia and Pacific Department of the European External Action Service in Brussels, and the EU ambassador to both Switzerland and the Principality of Liechtenstein. Prior to this, he was the minister and deputy head of the Delegation of the European Commission to Japan and the Asia-Europe Meeting (ASEM) counselor in the European Commission. Following this, he published “Asia-Europe: Do they Meet?” In his free time he likes to hike or go on walks, as well as read Korean literature. Among others, he has mastered so far the “Black Flower,” “Pachinko,” “The Vegetarian,” “Human Acts” and “Farewell Valley: A Novel.”