[Test drive] Nissan’s X-Trail is packed with features, but comfort isn’t one of them

[Test drive] Nissan’s X-Trail is packed with features, but comfort isn’t one of them 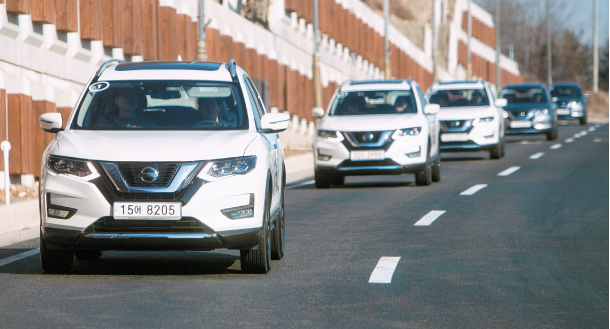 YONGIN, Gyeonggi - The new Nissan X-Trail is an easy-to-drive, approachable compact SUV packed with smart features, but the car lets itself down when it comes to comfort.

For the first test drive of 2019, the Korea JoongAng Daily took Nissan’s new X-Trail, freshly introduced to the Korean market, on a roughly 45-kilometer (28-mile) drive from Yongin to Icheon, Gyeonggi on Jan. 3.

The highest trim X-Trail, dubbed the 4WD Tech, has the advantages of an SUV with functionality and adequate driving without its size getting in the way, and could well be popular with drivers considering getting a larger car for the first time.

Equipped with a 2.5-liter engine and a shiftless transmission, or CVT, the SUV performed well both on a winding course and on the highway.

While gear shift loyalists won’t be happy with the X-Trail’s CVT, the vehicle adjusted to lower speeds just fine on the winding course with the accelerator responding to the push of a pedal without the need to think about gear changes.

While acceleration isn’t exactly zippy, the vehicle didn’t show any noticeable hiccups or problems other than the slight spongy feeling of the accelerator pedal.

As for steering, the X-Trail isn’t quick but responds relatively accurately and in a stable manner for its segment as it turned corners as intended without the SUV’s size being overbearing.

While the winding course proved to be a fun ride as the X-Trail passed corners without much difficulty, the vehicle was less than impressive on the highway at higher speeds.

On the larger road, the amount of road and engine noise from the gasoline-run vehicle was comparable to a diesel car, and the drive got tiresome toward the end of the nearly one-hour journey.

When reaching speeds over 120 kilometers per hour (74.5 miles per hour), the compact SUV produced even more noise and was noticeably shaky. The vibrations became more apparent at higher speeds and took some of the confidence away from the driver.

While drivers shouldn’t expect a perfectly smooth and stable ride from a vehicle of its class, the level of discomfort was notable enough to take points away from the overall driving experience.

The vehicle’s safety features, on the other hand, worked as well as Nissan Korea promised.

While the features were a nice addition to the vehicle, the lane keeping system only alerts drivers and slows the vehicle down without any automatic adjustment to the steering wheel, unlike other carmakers that feature similar technology.

In terms of interior space, the front row seats of the five seater offer plenty of room with good visibility from the driver’s side.

Meanwhile, the back seats should be pushed back for adults to make room for head space. Nissan Korea said its second-row seats provide a “cinema view” from the back, being slightly elevated than those in front.

However, sitting on the back seat with the seats in a vertical position, this five-foot-nine reporter’s head touched the roof. Leg room, on the other hand, was not an issue.

Storage enthusiasts will appreciate the 565-liter (19.95 cubic feet) space in the trunk, which also features a “hands-free power liftgate” that opens and closes automatically using a kick motion below the vehicle’s rear bumper.