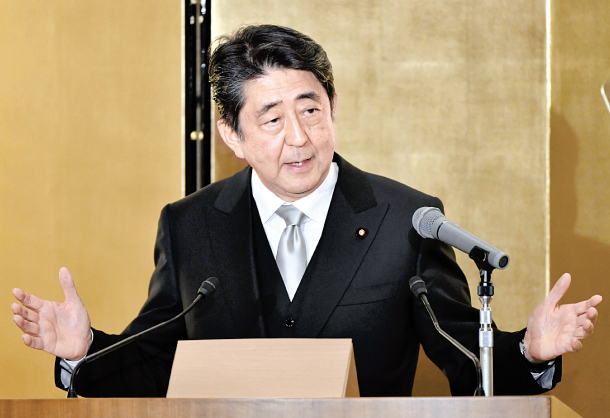 Japan’s Prime Minister Shinzo Abe ordered his government on Sunday to consider countermeasures against the Korean victims of forced labor who sued to seize the assets of a Japanese steel giant that has refused to comply with a Korean court’s compensation order.

On a Sunday debate program on Japanese broadcaster NHK, Abe described the move from the “laborers from the Korean Peninsula” as “extremely regrettable,” and said that he directed relevant ministries in Japan to “review specific measures” against them according to international law.

While Abe did not reveal what he meant by such measures, Japan’s Kyodo News reported that Tokyo may be preparing to take the case to the International Court of Justice in The Hague.

The spat revolves around the suits filed by Korean victims of forced labor against the Japanese companies, Nippon Steel & Sumitomo Metal and Mitsubishi Heavy Industries, for their exploitation during Japan’s colonial rule over Korea.

Last October, the Korean Supreme Court ruled in favor of the plaintiffs, saying the individuals’ rights to seek damages had not expired. The court ordered the companies to compensate them for their unpaid work decades ago.

In Nippon Steel’s case, the company was ordered to pay each of the four plaintiffs 100 million won (around $90,000).

The Japanese steelmaker, however, refused to comply with the ruling. The plaintiffs and their lawyers then applied for a seizure of the company’s shares in Korea with a local court. Another group of victims who won their suit against Mitsubishi is also planning to pursue the seizure of its patent rights in Korea.

While the two ministers agreed in their phone conversation to resolve the matter as soon as possible, Abe’s public statement on Sunday indicates that Japan intends to seek an international settlement on the rulings.

This is just one of the many historic disputes that have tested the two countries’ relationship, another being the issue of Japan’s wartime sexual slavery during its colonial rule.

Tokyo’s stormy reaction to the compensation suits is rooted in its claim that all matters relating to reparations were “completely and finally resolved” in the treaty normalizing relations between two countries signed in 1965, as Abe repeated Sunday.

The conflict over the rulings also comes amid an ongoing dispute over an incident involving the use of a military radar last month, further straining diplomatic relations between Seoul and Tokyo.

Japan’s Defense Ministry, seeking an apology from Seoul, posted a 13-minute video last month which it claimed was proof that a South Korean Gwanggaeto the Great warship locked its fire-control radar on to a Japanese patrol aircraft on Dec. 20 off Japan’s northeastern coast.

South Korea’s Defense Ministry rebutted this claim with its own video clip on Friday, which it said was proof that the low-flying Japanese plane was perceived as a threat to the destroyer, which was conducting a mission to rescue a marooned North Korean fishing vessel.

Abe was also asked about this incident on the NHK TV program on Sunday, but he replied curtly that the “[Japanese] Defense Ministry had already announced” his government’s reaction.

The Japanese prime minister’s measured response to the military dispute stood in stark contrast to his strong reaction to the compensation dispute.

On Friday, Tokyo’s Defense Ministry again rebutted Seoul’s video saying that there were “different claims from [their] position,” and a number of Japanese officials told various local outlets that they intend to press their argument until an apology is received.

Seoul’s Defense Ministry said on Sunday it would release six additional versions of its video clip in different languages to “prevent the spread of misunderstandings on the issue,” according to a spokesman. It already released versions in English and Korean on Friday.

Defense officials from both countries have agreed to hold consultations to resolve the dispute, but have not yet fixed a date for the talks because of a disagreement on where to meet.