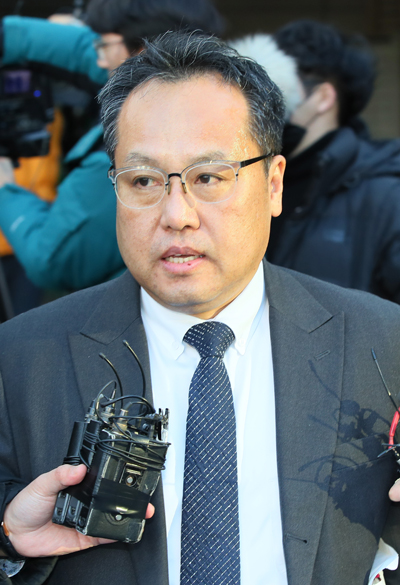 Song Myeong-bin, an executive at a tech company based in Seoul, was questioned by the police for the second time Sunday for the alleged long-term physical abuse of an employee.

Song, 49, the CEO of Marker Group, is accused of having habitually hit and threatened an employee surnamed Yang and of violating the Labor Standards Act. He was questioned by the police for the first time on Thursday.

Yang, 33, submitted a report to police in November claiming that Song struck him with objects - including a steel pipe, a wooden stick and a shoehorn - starting in March 2016. Yang submitted photos of bruises on his body that he claimed were the result of Song’s physical abuse.

A video released on local media outlets show Song repeatedly punching Yang while they appear to be alone in an office space. Song appeared at the Gangseo District Police Precinct in western Seoul on Sunday morning. He apologized to Yang, but also accused him of embezzlement.

“I apologize to Yang regarding the physical and verbal abuse,” Song told the press before entering the precinct. “I know that I cannot justify my actions with excuses.”

Still, he offered an explanation of his own to the press through a prepared statement.

“Yang was a co-CEO at Marker Group. The two of us had agreed that I would be in charge of patent registration and research and he would be in charge of the business management,” Song said. “But Yang started to lay his hands on company money and was delinquent in his job of managing the products, and overall led the company into a difficult time.

“And all that time, Yang still took some 90 million won ($80,643) as his yearly salary, an amount that he decided for himself, and took an annual bonus pay of some 15 million to 20 million won,” Song said.

Song said that he and the board of directors of the company asked Yang to resign earlier last year, but that Yang “only tried to destroy evidence against his embezzlement and corporate malpractice.”

Song said Yang submitted the videos and audio files alleging Song’s physical and verbal abuse of Yang to the police in order to cover-up the embezzlement allegations.

“Any other ordinary citizen would have resigned or reported to police before waiting to collect 22 recordings of abuse,” Song said. Last month, Song asked the prosecution to investigate Yang for his alleged embezzlement and corporate malpractice. Song also accused Yang of hitting him.

“Although it is embarrassing to admit, Yang hit me on the top of my head with a juice bottle,” Song said. “He also threatened to have my son murdered by an acquaintance he has in the Philippines.”

In December, Police summoned Yang and questioned him as the plaintiff. Police have prohibited Song from leaving the country.