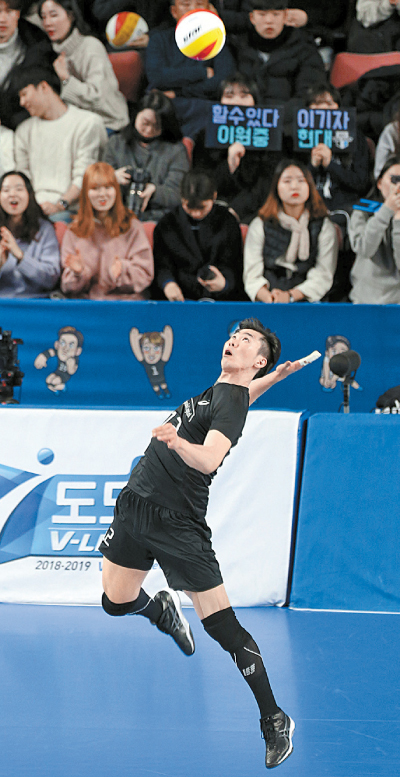 Jeon Kwang-in of the Cheonan Hyundai Capital Skywalkers serves during a match against OK Savingsbank Rush&Cash at Yoo Gwan-soon Gymnasium in Cheonan on Sunday. [NEWS1]

With the addition of all-around player Jeon Kwang-in, the Cheonan Hyundai Capital Skywalkers cruised to the top of the KOVO regular season standing after defeating the Ansan OK Savingsbank Rush&Cash 3-2 at Yoo Gwan-soon Gymnasium in Cheonan, South Chungcheong, on Sunday.

For the first time since Jeon joined the Skywalkers this season, he performed like he used to with his previous club.

Starting in the second set, head coach Choi Tae-woong made changes to the Skywalkers’ lineup. To strengthen reception, Choi took out Moon Seong-min. When Krisztian Padar began to struggle in the third set, he was also taken out of the game.

Once the two players left the court, Jeon led the Skywalkers for the remaining game, scoring 24 points, the most he has scored in a single game since joining the Skywalkers.

With the help of Jeon, the Skywalkers had an impressive come-from-behind victory and got on a three-game winning streak to top the leaderboard.

Throughout the match, Jeon showed his ability to be an all-around player. Of 91 serve receives the Skywalkers recorded, Jeon picked up 47 of them and he also had eight digs, the most on his team.

“It was a match that showed Jeon’s worth,” Choi said. “In a close game during the fourth set, he solved the problems and showed very good defense.”

Despite the win, Jeon wasn’t too satisfied about his performance as it was a hard fought match.

“This season, I’ve made some of our matches get more difficult to win from errors,” Jeon said. “It feels like I finished the match without getting my homework done. Sometimes, I make server errors and fail to make a successful spike. I always have disappointments.”

Once the 2017-18 season ended, the KOVO clubs began to fight over Jeon, a new free agent (FA). After numerous offers, Jeon left the Suwon Kepco Vixtorm and joined the Skywalkers. The Skywalkers didn’t hesitate in making big investments for Jeon, who is an outstanding player in offense and defense. Jeon signed at 520 million won ($464,323), becoming the second highest FA player in the KOBO after Han Sun-soo of Incheon Korean Air Jumbos.

Although Jeon’s contract was 30 million won less than Han, there were rumors that Jeon’s is more expensive when considering the two players’ options.

Padar was the best foreign player both last season and this season, ranking third in points - at 531 points - and Moon has been a leading domestic player for the Skywalkers. Due to this, Jeon started his career with the Skywalkers without a spot as the club’s main hitter, which led his average points per game this season to 13.3 points, the lowest since his debut.

“I think I just naturally focus more on defense, without noticing it,” Jeon said.

Although Choi said it’s a good thing that Jeon has set high expectations for himself, he also showed concern toward him as the expectations can overwhelm him.

Since the teamwork between the setter and hitters is crucial in volleyball, a number of players struggle when switching teams. Additionally, Jeon’s adjustment was harder in the beginning as the Skywalkers rotate between the two setters rather than one starting player and another backup. Jeon had to practice timing with two setters.

Even the Skywalkers’ veteran Shin Young-suk showed concern for Jeon, saying, “It must have been really difficult for Gwang-in.”

The Skywalkers will continue their season with a match against the Incheon Korean Air Jumbos at home in Cheonan on Thursday at 7 p.m.