Korean football star Kwon Chang-hoon has scored his first goal of the season in France following his long-awaited return from injury. 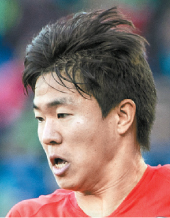 Kwon, an attacking midfielder for French League 1 club Dijon FCO, scored his team’s second goal in their 3-1 win over fourth-tier club SC Schiltigheim in a French Cup round of 64 match at the Stade de l’Aar in Schiltigheim, France, on Saturday.

With Dijon leading 1-0, Kwon fired a left-footed strike in the 72nd minute, helping his side reach the round of 32 in the domestic cup competition.

Kwon was making his first start of the 2018-19 season following his comeback from an injury.

The 24-year-old ruptured his right Achilles tendon in Dijon’s final league match of the 2017-18 season in May, causing him to skip the 2018 FIFA World Cup. Throughout the 2017-18 season, Kwon scored 11 goals for the French club.

Kwon returned to the pitch as a second-half substitute on Dec. 19 in a French League Cup round of 16 match against FC Girondins de Bordeaux. He was similarly brought on against Saint-Etienne in a French League 1 match on Dec. 23.

Kwon made his professional debut with the Suwon Samsung Bluewings in Korea in 2013 after playing for Suwon’s youth team at Maetan High School in Suwon, Gyeonggi. During his four years with the youth team, Kwon played in 109 games, recording 22 goals and nine assists.

Once Kwon went professional, he played a leading role in helping Suwon win the 2016 Korea FA Cup and finished runner-up in the 2014 and 2015 K League Classic seasons.

Continuing his success, Kwon was called up by the Korean national team to compete at the 2015 East Asian Cup and made his international debut playing against China.

On Sept. 3, 2015, he scored his first goal for the national team during a World Cup qualifying match against Laos. He was lauded by the team for his smart plays and strong work ethic. During the 2016 Rio Olympics, he helped Korea advance to the quarterfinals by scoring two goals under head coach Shin Tae-yong.

Kwon signed a three-year contract with Dijon in January, with 1.2 million euros ($1.4 million) in transfer fees. Kwon’s transfer fee was the third highest that the French club has ever paid.