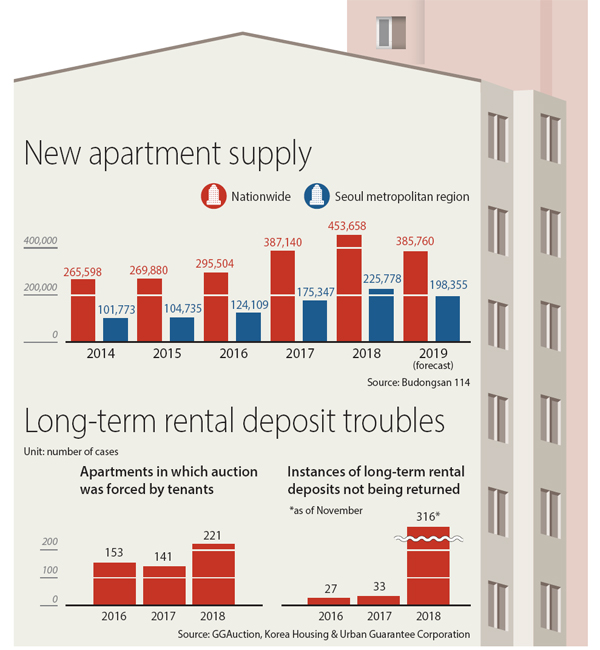 Under the jeonse system, tenants pay a massive deposit and no rent, and the deposit is returned, without interest, at the end of the lease term.

The increasing supply of new housing and the rising level of household debt over the past few years have led to a fall in housing prices. This has forced some property owners financing their properties with mortgages and jeonse deposits, or tenants who have failed to receive their deposits, to liquidate properties at auction.

The market has labelled these properties “tin-can housing,” as they have a lower value than what is owed to creditors.

After property values increased steadily from 2014 to 2016, a flood of new supply in 2017 led to a fall in both jeonse prices and housing prices across the country last year.

In 2018, many properties worth less than the mortgage plus jeonse amount were found in areas outside of Seoul, such as Geoje, South Gyeongsang. The incidence of underwater properties is on the rise in Seoul, with more tenants unable to collect their deposits.

According to GGAuction, a property information provider, the number of jeonse tenants who put their properties up for auction rose last year. While the figure was at 153 in 2016 and 141 in 2017, it increased over 50 percent last year to 221.

Auction prices at times fail to cover the mortgage and jeonse.

The number of instances where the auction price was lower than the sum demanded by creditors, including the jeonse depositor and mortgage owner, greatly increased last year.

Experts forecast that the tin-can housing phenomenon will worsen this year. Concerning issues include a large number of homes, 390,000, to be added to supply in 2019, a rise in interest rates and the ending in February of a government policy that prevented financial companies from exercising security rights over property.

The policy was a temporary measure put in place last year to ensure housing stability. Financial institutions are set to liquidate properties when the policy expires next month.

“Tin-can housing will likely increase this year in not only areas where the problem was already severe, such as Gyeongsang and Chungcheong provinces, but also in North Jeolla and areas in the capital metropolitan region,” said Jang Geun-suk, the head of the auction advisory center at GGAuction.

The problem’s severity is also reflected in statistics provided by the Korea Housing & Urban Guarantee Corporation (HUG), a state-funded corporation that guarantees deposits paid by tenants.

Reports of instances where jeonse deposits weren’t returned rose over 850 percent to 316 last year as of November from 33 in 2017. There were 27 reported cases in 2016.

Nervous tenants have flocked to HUG, which provides financial products that guarantee deposits. The number of HUG products registered by users increased to 89,350 last year, from 24,460 in 2016.

Experts call for a government response to the tin-can housing phenomenon.

“There may be controversy surrounding moral hazard, however, the government should consider buying tin-can housing in major regions and transitioning them into public-lease housing,” said Rho Tae-ug, a real estate professor at Kangnam University.

“People in the housing market need to thoroughly review the validity of the transaction before, and avoid risks by participating in jeonse deposit guarantee products,” explained Rho. “Fundamentally, the level of financial knowledge of the people […] needs to be improved.”

While housing prices in Seoul are unlikely to drop dramatically and will not suffer the tin-can housing crisis to the extent as in other regions, those who bought housing with jeonse are at risk with jeonse prices falling.