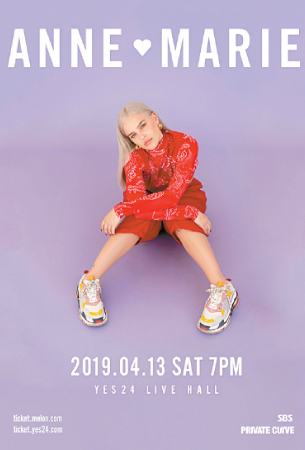 English singer-songwriter Anne-Marie Rose Nicholson - better known as Anne-Marie - will be making her first visit to Korea in April for a concert.

According to the entertainment company Private Curve on Monday, the concert will be held on April 13 at Yes24 Live Hall in Gwangjin District, eastern Seoul. Tickets will go on sale starting Jan. 14 on Melon Tickets and Yes24.

Anne-Marie made her debut in 2013 with her single “Summer Girl,” after spending her early career working with English bands Rudimental and Raized by Wolves.

In 2016, her single “Alarm” topped the music charts in Britain.

She continued producing hit songs including “Ciao Adios” (2017) and “2002” (2018). She is best known for being featured on the English band Clean Bandit’s song “Rockabye,” in which she appears alongside rapper Sean Paul.