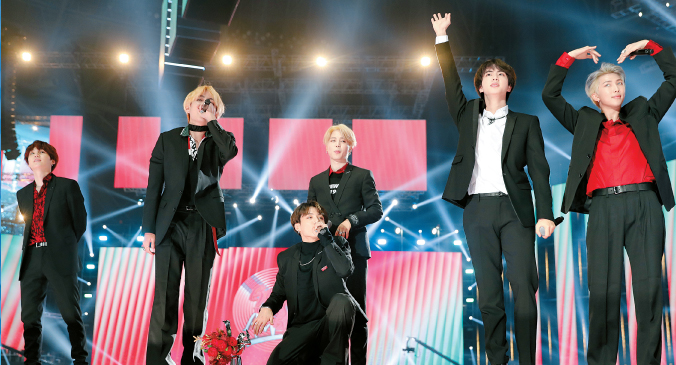 Boy band BTS performs during the 2019 Golden Disc Awards at the Gocheok Sky Dome in western Seoul on Sunday.[ILGAN SPORTS]

Global sensation BTS wasted no time to start the new year off with a big statement. The seven-member act took home six trophies at the 33rd Golden Disc Awards, which was held over the weekend. From the Best Music prize to the Best Artist prize and the Best Album prize, BTS cleaned up in nearly all of the major categories, capping off what has been a historic 12 months for the group.

The 2019 Golden Disc Awards were held at the Gocheok Sky Dome in western Seoul Saturday and Sunday evening, and looked back at the past year in music. From the mighty BTS to the freshest names in the field, the annual award show honored the biggest and brightest names in the music industry and also provided a stage for up-and-comers to perform as well.

“We give all of our honor to [our fan club] ARMY,” said leader RM. “2018 was the year we tasted the fruits of our hard work. We have been honored with so many undeserving titles that go with our name BTS … But I believe that if we try hard enough, then we’ll be able to live up to the many words that once tested us. We vow to do our best always.”

“Jonghyun loved his music and the stage more than anyone, and we hope you remember him for a long time,” said SHINee member Taemin.

“Poet | Artist” was released last January, and is comprised of songs written and produced by the singer. The award ceremony even held a moment of silence in honor of the late star.