Comedian An Young-mi has a serious side: With role in ‘Mama Fairy,’ An showed off her acting skills for the first time

Comedian An Young-mi has a serious side: With role in ‘Mama Fairy,’ An showed off her acting skills for the first time 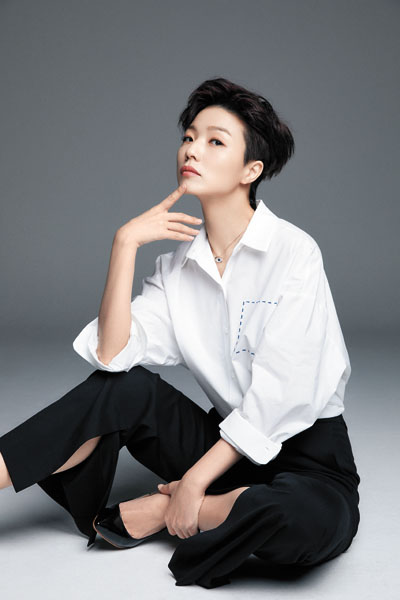 Although An Young-mi has been known as a comedian since she made her debut in 2004, she spent the past year proving that she can be more than just an entertainer.

Over the past 16 years, she has appeared on most of Korea’s major comedy programs, including tvN’s “Saturday Night Live” and “Comedy Big League,” on which she was not afraid of making frank comments about pretty much everything, from talking about her relationships to describing her own personality.

Last year, however, An wanted to prove that she had more to offer. She sang on stage as a member of the comedy girl group Celeb Five, along with comedians Song Eun-yi, Kim Shin-young and Shin Bong-sun, and also became the host of the MBC’s radio show “Ehe Radio” with entertainer Choi Wook.

But her biggest role of the year came in the tvN’s series “Mama Fairy and the Woodcutter,” which recently aired its final episode.

Comedian An Young-mi plays the guardian deity Jo Bong-dae, top, in the tvN series “Mama Fairy and the Woodcutter.” An, middle left, performs with comedian Kim Shin-young. The two are both members of the comedy girl group Celeb Five, pictured above.

The series - an adaptation of a webtoon, web comic, series that goes by the same title - tells the story of Sun Ok-nam, a 699-year-old fairy from Gyeryong, South Chungcheong, who lives on Earth after having her winged clothes stolen by a woodcutter who eventually becomes her husband. The fairy lives in the 21st century and works as a barista who mesmerizes people with her excellent coffee-making skills while she looks for her resurrected husband. In the series, An played the role of Jo Bong-dae, a pink-haired guardian deity who owns a coffee truck at a university and hires Ok-nam as the shop’s barista. The character, however, was not an easy one to play because she had to be both funny and serious.

“Jo has to be unique and cautious, has to know how to play games and show-off her talents in front of boys,” An said during an interview on Thursday. “In many scenes, I had to act alone, which was hard. But I didn’t complain at the time because the mood on set was so good.”

Although this was her first role in an actual drama series, An has wanted to act ever since she was young.

“I wanted to become an actor when I was young,” she said. “I also majored in acting in college. But then I passed the comedian test, so I naturally became a comedian. I was still very passionate about acting, so I appeared in several movies with minor roles, but I guess I never received the [same attention I did as a comedian.] I was worried while filming the ‘Mama Fairy’ series that I would look too different from [what people expect from me.] But thanks to my previous acting experience, it all turned out well.”

One of the most memorable moments for An while filming the series was when she had to scold Eom Gyeong-sul, a college student who is later revealed to be a mentally ill stalker who takes illegal photos of other students.

“Hidden cameras are something very serious in Korea at the moment. So what I was telling Eom in the series was actually directed at real criminals who film others in secret. I shouted at him, as if I was filming a psychopathic drama - I got so immersed in the acting. I think that was when my character started to get more serious.”

A lot of people wondered about her distinctive hair and fashion in the series. During a recent appearance on the JTBC show “Men on a Mission,” An mentioned that her pink hair started to smell bad after she continuously dyed her hair for the role.

“To tell you the truth, I think the character I played here was a normal one, compared to the other roles I have taken in comedy programs,” she said. “I wanted my character to be more unique, so I dyed my hair pink - it was my own idea. And I also wore an all-black or all-red body suit. The director actually suggested that I should wear a wig, but I didn’t want people to think, ‘Look at her, she’s acting with a wig on.’ But I kind of regret it. My hair became thinner and smelled really bad. Even worse was when the hair dye was literally melting down on my face because it was so hot while we were filming.”

One of the biggest supporters of An during the filming of the show was her boyfriend, whom she met four years ago during a guest appearance on a radio show hosted by Sunny from Girls’ Generation. One of the show’s listeners sent in a message to the show asking An out on a blind date and they later started dating.

“He’s very objective when it comes to giving advice,” she said, “which is also why I ask him a lot about how I act - [it’s like I’m listening to a third person’s comments.] But because he is very cool-headed, we have also fought a lot. I know that he’s just trying to tell the truth and be objective about everything, but sometimes I simply want him to be on my side.”

This year, An will continue working with her comedy girl group Celeb Five. Through working with the team, she has learned how hard it is to be a pop singer.

“Practicing dance every single day is hard enough, but [these idol singers] are not even allowed to eat a lot,” she said. “Dancing all night and then getting make-up in the morning and performing on stage in the afternoon - I thought, how is this even possible? It was very heartbreaking.”

This year, she is preparing to launch a sub-unit of her group with the other members.

“We are thinking about making a reality show. Our original goal was to challenge ourselves in various fields - maybe making a movie or a drama together. I will work hard this year. Many of my fans are telling me to appear more on screen and do more things. It’s going to be a busy year.”

She wrapped up the interview by offering advice to young people who want to be comedians.

“Don’t be afraid of expressing who you really are. If you simply wait for people to recognize your talents, nobody will know. Be more active and challenge yourself.”