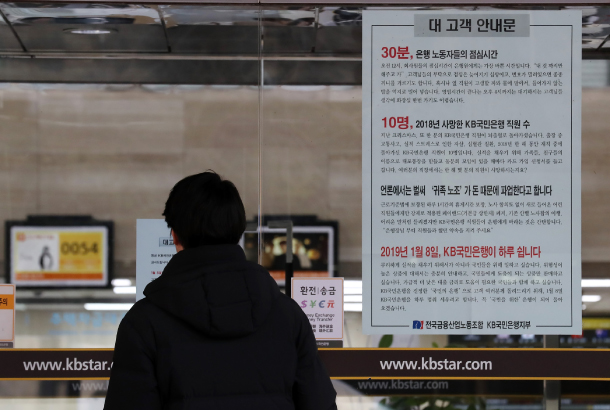 A notice of a strike planned today is attached to the front of KB Kookmin Bank’s Namdaemun branch in central Seoul. [NEWS1]

KB Kookmin Bank, Korea’s largest bank, is set to launch a nationwide strike today for the first time in 19 years due to a dispute over bonuses and wage system reforms.

Some KB Kookmin Bank branches will close unless a dramatic breakthrough takes place during a last-minute negotiation held Monday, according to the bank and a statement attached to several Kookmin Bank outlets. No results were announced as of press time.

“We still don’t know the scale of the walkout - the number of participants and how many branches will shut down,” said a spokesperson at KB Kookmin Bank.

“To minimize the inconvenience that consumers might face, we will assign several branches as a central outlet so that they can handle the tasks of nearby closed banks,” the spokesperson said.

The bank added that consumers will be able to use digital banking platforms and the online and mobile services are able to cover most of the functions typically fulfilled at brick-and-mortar branches.

The planned action comes after 96 percent of union members agreed last month to go on strike on Jan. 8.

Hur Yin, head of the bank, announced late Monday that management has agreed to raise the year-end bonus ratio to that proposed by the labor unions, but still remains cautious about other areas of conflict including the seniority wage system.

The chief said that this year’s bonus will be equivalent to last year’s at 300 percent of basic monthly wages, as suggested by the union, higher than the initially proposed 250 percent.

The union has demanded that the year-end bonus be set at 300 percent, since the bank saw all-time records in both profit and revenue in 2018.

The bank, on the other hand, claimed before that it can’t give such a high bonus since it has failed to reach this year’s target - its return-on-equity reaching 10 percent.

While the head announced the concession, he called on union members to cancel the strike.

“As for a question whether ongoing tension should be solved by striking - a measure of last resort - rather than conversation, I strongly believe that is not the case,” Hur said.

Workers with managerial roles at KB Kookmin Bank also threatened to hand in their resignations if a strike takes place.

Despite the decision on annual bonuses, differences still exist between management and unionized members.

A major issue concerns when the bank will implement a measure called the wage peak system that involves a gradual reduction in salary when senior employees pass a certain age. The age of implementation is contested.

The company and its union also don’t see eye to eye over an expansion of a wage system that limits wage increases if a worker keeps on failing to be promoted.

The union said that the system should be removed, while management hopes to extend it.