A day among Moon’s biggest fans

A day among Moon’s biggest fans

KWON HO
The author is a political news reporter at the JoongAng Ilbo. 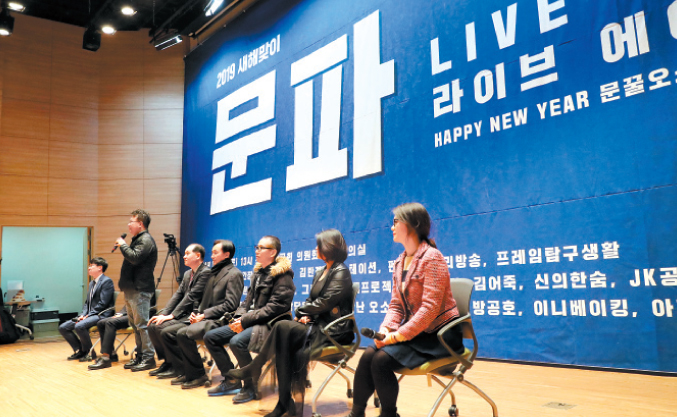 “The largest number of people gathered in this conference room since Representatives Hall was built in the National Assembly,” said Democratic Party (DP) lawmaker Kim Jin-pyo as President Moon Jae-in’s supporters gathered for a New Year’s meeting on Jan. 5. More than 1,000 people attended the event, which was held in a room that can accommodate 450 people.

The official title of the event was Moon-pa Live Aid. Supporters show strong devotion for President Moon, using terms like Moon-pa, which refer to the group of passionate supporters of the president. At the event, supporters said that they would work hard to protect President Moon. Their feverish support for Moon continued. “We endured the hellish 10 years under the conservative administrations!” shouted one of them. “We will serve as the supporting actors for president’s leading role.”

They also did not hide their skepticism of the DP. When one of the panel members mentioned party leader Lee Hae-chan, the audience booed. Lawmaker Kim Jong-min, who attended the event, said, “Please help the DP too, so the president can be properly protected.” But the audience and the host countered, “That’s why the party is being severely criticized.” All of a sudden, a podcast host said, “We are investigating an organized crime ring possibly involving former Seongnam Mayor Lee Jae-myung. We are not scared to catch him [the current Gyeonggi Governor now under trial for various charges.]” Lee, who is a member of the ruling DP, is considered an enemy of these supporters.

To President Moon, his fan clubs are emotional allies. Former president Roh Moo-hyun, a political partner and ally, also valued his supporters. However, the DP seems to be facing a dilemma: they are the allies at the front line of debates, as well as an ignition point for discord. The Moon-pa club had a role in the aggravating internal division through the local election and party convention last year. It also affected the decline of both Moon’s and the party’s approval ratings.

This year is the third year of the Moon administration. At this important and challenging juncture, the environment is not friendly. Moon’s approval rating is declining and various indicators are not looking good. Over the former investigator Kim Tae-woo’s allegation about the Blue House’s alleged involvement in spying on private citizens, the ruling party is having a hard time dealing with what reportedly happened in the Blue House.

A crack is the prelude to a collapse. This small internal discord could spread uncontrollably if it is not properly handled. If the confusion continues, it will not be good for the ruling party ahead of the general election next year — not to mention for the country.