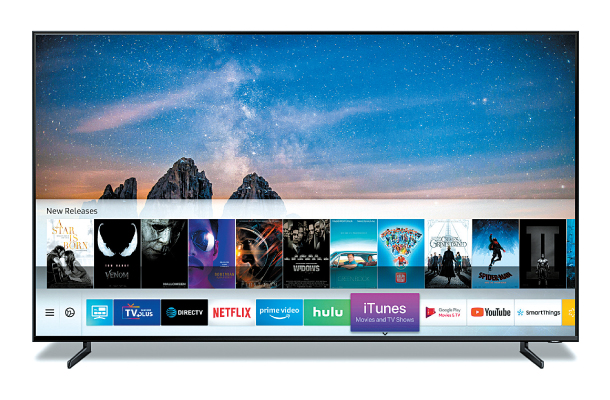 Samsung Electronics is teaming with arch-rival Apple to enable its smart TVs to access video, audio and other programming from iTunes.

It is the first time the two have cooperated on content. The partnership was announced Monday.

Beginning this spring, Samsung smart TVs will have iTunes movies and TV as a default option, along with YouTube and Netflix. For customers with older versions of Samsung smart TVs, the service can be added with a software update.

Apple’s new movie and TV streaming service is set for official introduction in March. Samsung Smart TVs will be the first non-Apple devices to have access to the service.

Another feature to be made possible on Samsung TVs is AirPlay 2, a function that allows for wirelessly access to movies, photos, podcasts or music from Apple devices.

Until recently, before Chinese manufacturers became smartphone leaders, Apple and Samsung competed intensely for domination in the market.

The two were also embroiled in a seven-year patent battle that was only concluded last year.

Despite the rivalry, they have continued to do business with each other. Samsung has supplied Apple with smartphone chips and displays.

At an event held in Las Vegas Monday before the Consumer Electronics Show 2019, the president of the Samsung visual display business, Han Jong-hee, told reporters that the collaboration is a “win-win” for both companies while customers will benefit from a wider range of choices.

“For now, the collaboration will be about content. But in the future, I expect there to be other fields in which we can work together as well,” said Han. According to another senior executive at the event, the project was initially suggested by Samsung.

The company suggested that it is open to partnerships with other companies as well, saying in a press release that it aims to minimize the barriers between products and providers to offer a “rich selection of content.”

For Samsung, Apple programming will give it an upper hand in attracting customers.

The war in the TV market is now as much about what is available on devices as it is about brighter, more colorful and slimmer panels. How TVs seamlessly link to online resources is one of the major battlegrounds.

The partnership also reflects how Apple is increasingly putting weight on services instead of hardware - the reason it came up with the iTunes video streaming service. Global iPhone sales are falling short of expectations as customers don’t change phones as frequently as before and many are being turned off by the high prices.

Samsung brings with it the strength of being No. 1 in the global TV market, with more than a 40 percent share.

“We look forward to bringing the iTunes and AirPlay 2 experience to even more customers around the world through Samsung smart TVs, so iPhone, iPad and Mac users have yet another way to enjoy all their favorite content on the biggest screen in their home,” said Eddy Cue, senior vice president of Internet Software and Services at Apple.