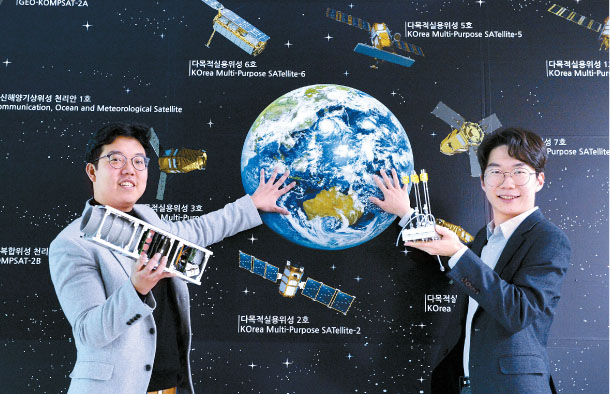 Korea’s own rocket boys are hoping to reach for the stars. Fueled by a life-long passion and the spirit of entrepreneurship, they’re hoping to lead a new generation of space innovation in the country.

Last month, eight Korean space enthusiasts in their 20s and 30s came together to form a group dubbed the Space Mafia at a cafe in Seoul.

Besides being united in their love for the cosmos, the members are all CEOs of space-related start-ups. Their specialties are diverse, including small artificial satellites, rockets, robots, drones and sensors.

Last Friday, the JoongAng Ilbo met up with two members of the Space Mafia to hear their story.

Park Jae-pil, 31, is the oldest space mafioso. As CEO of Nara Space Technology, Park is not only in charge of a 10-employee company, but also a student enrolled in a combined master’s and Ph.D program at Yonsei University’s Astronomy department.

Park’s main interest lies in cube-shaped satellites, commonly known as CubeSats, that weigh 10 kilograms (22 pounds) or less. With advances in the miniaturization of technology, these tiny satellites have been steadily rising as a cost-friendly alternative to larger satellites over recent years. CubeSats are capable of doing the same jobs as many traditional satellite activities including image capturing and geographic information collection.

Park was inspired to found his start-up after his team made it into the final three at the Korea Aerospace Research Institute’s first Nano Satellite Contest in 2012.

With his teammates, who hailed from different schools like Kyung Hee University and Korea Aerospace University, Park collected 100 million won ($89,800) as starting capital to launch the company in 2015.

Park is now one of Korea’s most-recognized CubeSat developers through his active participation in international projects.

Last January, he helped develop a 3-kilogram CubeSat to be loaded onto a Polar Satellite Launch Vehicle (PSLV) in India as a Yonsei researcher in partnership with the U.S. National Aeronautics and Space Administration (NASA).

His company has made great strides over the years. Nara Space Technology’s revenue last year totaled 370 million won thanks to the company’s variety of business activities including consulting services at universities and project participation. Nara’s goal this year is to launch a satellite inscribed with the company’s name.

“Currently, only two companies in Korea specialize in nanosatellites - Dream Space World and us,” said Park. “We hope to become an exemplary aerospace technology company in Korea.”

Last March, he founded start-up Uzuro Tech with the goal of preventing space pollution. Lee develops spacecraft thrusters, or small propulsive engines, to maneuver and propel small satellites to drop them back down to the earth’s atmosphere after usage.

Lee started making thrusters based on the belief that the rising number of small satellites will inevitably lead to greater space pollution. Small satellites today are not usually equipped with thrusters.

Like Park, Lee’s obsession with space started at an early age - he even participated in a national water rocket competition when he was in elementary school. By his last year of high school, Lee had won grand prize in the Aerospace and Aviation category as a team at the Conrad Challenge, an annual international competition based in the United States.

“I wanted to work with projectiles at first, but it wasn’t realistically easy because of the high costs and level of technical difficulty,” said Lee. “My goal is to put our thruster onto Park Jae-pil’s cube satellites and have them launch into space by 2020.”

A huge space fan since childhood, Shin formed an amateur space rocket club when he was in middle school. He left to study in Canada for high school, hoping to have access to more opportunities to study aerospace and rockets. After two years at the University of Waterloo, Shin returned to Korea and picked up studies at Kaist.

Shin politely refused the JoongAng Ilbo’s request for an interview, explaining that he does not “have anything to boast about as a businessman yet.”

“We have plans to launch a liquid rocket within this year, and when that time comes I will proudly present our company to the world,” he added in a phone call.

Industry experts welcome the high level of interest demonstrated by the young pioneers, and call for the government’s active support to grow them into future leaders.

“Korea’s youth are jumping into the aerospace technology sector, which even experienced entrepreneurs and scientists hesitate to enter,” said Choi Nam-mi, a business strategist at the Korea Aerospace Research Institute. “The government should actively support and nurture these young people.”