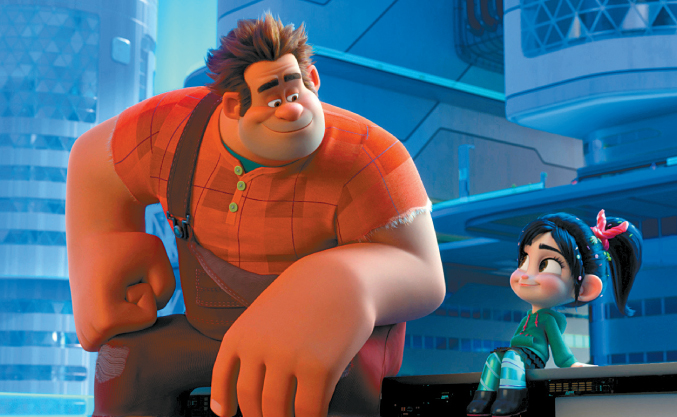 “Ralph Breaks the Internet,” the sequel to “Wreck-It Ralph” (2012), pushed “Aquaman” from the top of the weekend box office chart in its debut weekend. [WALT DISNEY COMPANY KOREA]

“Ralph Breaks the Internet” surprisingly knocked DC Comics’ underwater superhero off the top of the box office in its debut weekend. While “Aquaman” slipped down a spot, the music sensation “Bohemian Rhapsody” rounded out the top three, easily outperforming recent releases like the action-packed title “Take Point.”

Disney’s sequel to “Wreck-It Ralph” (2012), far outsold the competition over the weekend. Since its release on Thursday, the film has topped the daily box office charts and from Friday to Sunday, it sold 628,000 tickets at 1,453 screens, accounting for 30.7 percent of the weekend’s ticket sales revenue. According to data provided by the Korean Film Council on Monday, the title has sold a total of 758,000 admissions since its release.

Bringing back the friendly video game villain Ralph (voiced by John C. Reilly) and his adventurous friend Vanellope (Sarah Silverman), the animation begins as Ralph tries to make his restless friend happy by creating a secret bonus track in her game, Sugar Rush. This, in turn, breaks a steering wheel. The only place to find a replacement is on eBay. To prevent the game from getting unplugged forever, the pair travels into a newly-installed Wi-Fi router at Litwak’s Family Fun Center and Arcade, to procure the new wheel for the old game before it’s too late. To raise the funds, they learn the rules of the new world and try to go viral by making a series of funny videos.

Director Jason Wan’s “Aquaman” came in at second. The superhero title, which has topped Korea’s weekend box office for the past two weeks, sold 482,000 tickets at 1,123 screens in the past weekend, bringing its total sales to 4.5 million tickets since its release on Dec. 19. The film has become one of the highest-grossing DC titles in Korea.

Starring Jason Momoa as Aquaman, Amber Heard as Princess Mera and Nicole Kidman as Aquaman’s mother, Queen Atlanna, the film centers on Aquaman, who decides to confront and fight his half-brother Orm (Patrick Wilson), the current king of the underwater kingdom of Atlantis who is looking to wage a war against those on land.

Due to the weak performance of recent offerings, “Bohemian Rhapsody,” about the British rock band Queen and its lead singer Freddie Mercury, rounded out the top three, and is nearing the 10 million ticket sales mark.

Though it landed at a distant third, the film managed to sell an impressive 176,000 tickets in its 10th weekend, bringing its total ticket sales to 9.6 million.

“Take Point” is about a mercenary force led by Ahab (Ha) on a covert CIA operation to apprehend a high-profile North Korean official in an underground bunker beneath the surface of the demilitarized zone. 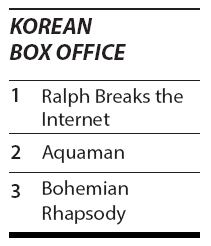 “Mal_Mo_E,” a historical title about a group of people who try to publish a hangul (Korean alphabet) dictionary against pressure from Japanese military during Japan’s colonial rule over Korea (1910-45), came in at sixth with the sales from special preview screenings. The film will arrive in theaters on Wednesday.

The female action-packed movie “No Mercy,” about an older sister trying to find revenge against people who took her younger sister away, debuted at seventh.