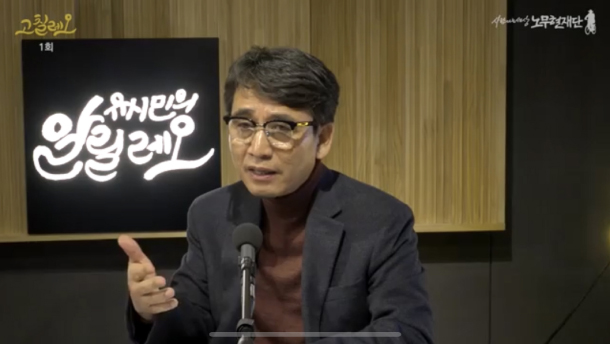 Rhyu Si-min, chairman of the Roh Moo-hyun Foundation, records an episode of his podcast “Alileo” that was released on Monday. [YONHAP]

A new podcast run by Rhyu Si-min, the chairman of a foundation dedicated to late President Roh Moo-hyun, is the hottest thing to listen to among Korean liberals.

Conversely, hundreds of thousands of conservatives are flocking to the YouTube channel of Hong Joon-pyo, former chairman of the main opposition Liberty Korea Party.

Moon served as presidential chief of staff in Roh’s Blue House from March 2007 to February 2008 and sees Roh as his political mentor.

Roh leaped to his death on May 23, 2009 during a corruption probe from the right-wing Lee Myung-bak administration. He is widely considered an iconic figure in Korean liberal politics.

Rhyu’s first episode, an hour-long interview with Moon Chung-in, the presidential special adviser on security, unification and diplomacy, received 18,300 likes on Podbbang, the country’s largest podcast app, since it was uploaded last Saturday. “Alileo” has collected more than 86,500 subscribers so far, as it is in first place among current affairs podcasts on Podbbang.

Rhyu, who served as health minister in the Roh government, has a wide fan base among Korean liberals, especially among the younger generation. Many watched him debate on the JTBC talk show, “Ssulzun,” which Rhyu has appeared as a regular panel member on for two and a half years since early 2016. Rhyu’s popularity also stems from the dozens of best-sellers he has written, which cover topics ranging from politics and economics to history and writing.

Responding to speculation he may run for president in 2022, Rhyu said Monday there was no chance he will re-enter politics. He said that late President Roh told him on April 20, 2009 - about one month before Roh committed suicide - that it would be best for Rhyu to write and lecture.

Rhyu recalled visiting Bongha Village in Gimhae, South Gyeongsang, where Roh lived after retirement, to see the former president. Over three hours reminiscing over the past, said Rhyu, Roh told him that politics was meant for people who couldn’t do anything else, and that Rhyu didn’t fall into that category because he could write and teach.

“I think he was feeling a sense of regret [about politics] at the time,” Rhyu said of Roh.

Rhyu quoted Roh as saying, “Politics is meant to make people’s lives happier. But what about my happiness?”

Rhyu continued that Roh looked “very lonely” at the time and said that after experiencing politics himself afterward, he came to realize that Roh was right.

“I wasn’t good [at politics], people didn’t acknowledge me and I wasn’t happy,” Rhyu recalled. “I thought to myself, ‘I should’ve listened to him.’”