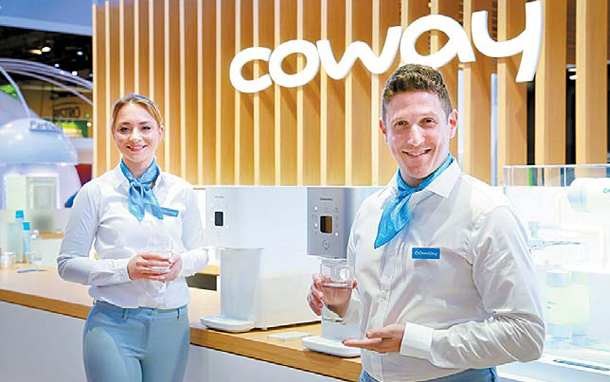 Models show off Coway’s Ciroo direct water filters. The filter can remove ion substances in water that are ten-thousandth the size of a single hair. [COWAY]

At its fourth appearance at the Consumer Electronics Show (CES), home appliance maker Coway is showing off phone-charging air purifiers and urine-analyzing bidets under the theme of “Being Well, Feeling Good.”

One of Coway’s most highly-anticipated innovations is the Ciroo direct water filter, for which it received the CES 2018 Innovation Award ahead of the show last November.

This filter technology is capable of removing ion substances in water that are ten-thousandth the size of a single hair, and can purify 30 times more water than the company’s original filters.

The new water filter has improved hygiene features. It can clean itself, preventing build-up of limescale, and has an automatic drainage system that empties the water inside the filter if the appliance is not used for 24 hours.

The Coway Interior Smart Air Purifier has also been unveiled at CES. Unlike other purifiers, Coway’s newest purifier comes with double filters that cleanse the air twice. It’s also designed with fabric-like materials that come in warm colors like “snow gray” and “sage green,” a break away from the traditionally white appliances.

“We hope to transform the image of air purifiers from a ‘rigid and cold appliance’ to ‘an appliance that can change the ambience of a home,’” said a Coway spokesman.

The new air purifier boasts a host of advanced tech features. Users can charge compatible smartphones by simply placing their handsets on top of the appliances, while they can check indoor and outdoor air quality in real-time with Coway’s IoCare mobile app.

Coway is also showcasing its latest bidets at the show. Its smart built-in bidets come with a urine analysis sensor that can assess users’ health and report the data through the IoCare app. The company partnered with famous Egyptian designer Karim Rashid to come up with eye-catching bidet covers, which come in metallic gold, silver and pink.

Coway also announced at CES that it will actively expand its bidet business into the American market this year. The company has been selling air purifiers there since 2016, while it began U.S. sales of water filters last year.

“This exhibition has been an opportunity for Coway to make an impression on the world,” said Lee Hae-sun, CEO of Coway. “We will try to become a company that can lead global trends in wellbeing consumer electronics with our technological capabilities and creative ideas.”