LG unveils TV that rolls up for storage

LG unveils TV that rolls up for storage 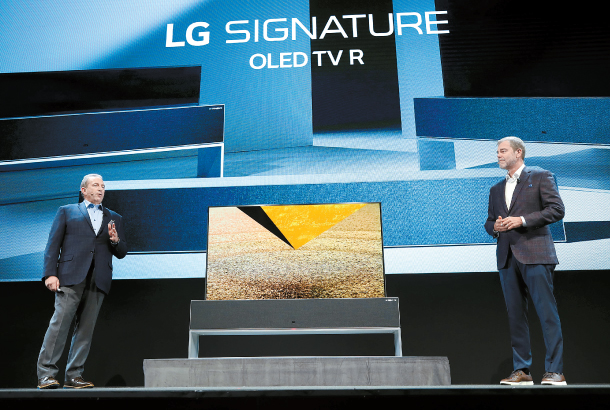 Last year, its affiliate LG Display unveiled a prototype of a 65-inch rollable OLED display panel at the same event. Dubbed the LG Signature OLED TV R9, it uses the same technology, only it comes with an aluminium case at the screen’s bottom that looks like a long tissue box.

A rolling OLED display was possible because unlike TV panels of the past, OLED screens don’t need backlight to show color, but have molecules that let out light on their own.

The panel can roll itself up and down from the case so that the television set looks more like a long, rectangular table once the screen is completely inserted. LG boasts that the screen can maintain its color definition even as it rolls itself. R9 won the CES 2019 Innovation Awards in the video display sector.

LG plans to launch global sales of R9 this year, starting from Korea. Its price was not disclosed, but it will be among LG’s premium television lineups. The advantage of the rollable TV set is that it can be placed in locations like the window side or in the middle of a room. For conventional TV screens, the popular choice was beside or on the walls as they take up space and block the view if installed elsewhere.

The television set also comes with high-quality speakers and an artificial intelligence software that enhances the set’s performance to adjust definition and sound according to the film or video played. It also recognizes simple vocal commands.

When the screens are rolled inside the case, R9 can work similarly to an audio set as it can play music via connection to smartphones or other portable devices. It also comes with various modes to use the screen apart from watching movies and TV shows.

It can function like a huge electronic canvas that shows photos saved in your smartphone. For those who want to create a cozy atmosphere, it has a “Mood” mode that plays a video of a fireplace or displays mood-specific light on the screen.

LG Display Vice Chairman Han Sang-beom expressed confidence in the panel in front of local reporters on Tuesday at the CES. According to Han, the rollable panel was rolled and unrolled more than 100,000 times during its development process.

“We’re talking with other clients as well [apart from LG Electronics] for the rollable TV panels,” he said. “My plan is to target the premium market instead of aiming for sales volumes.”