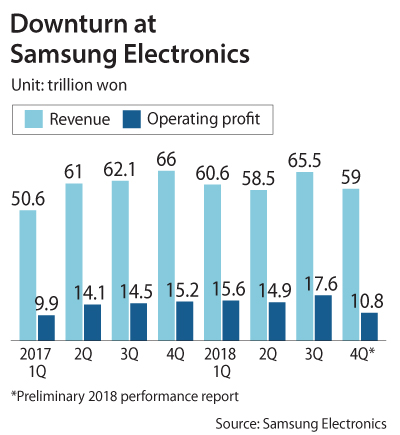 Samsung Electronics announced sharply lower earnings for the fourth quarter, an earnings “shock” that suggested that the “supercycle” in the global semiconductor market is nearing an end.

Preliminary 2018 performance numbers released Tuesday predicted the local IT giant’s operating profit between October and December of last year would be 10.8 trillion won ($9.6 billion), down 28.71 percent year on year.

This is the lowest figure since the first quarter of 2017’s 9.9 trillion won. Between those two quarters, operating profit had consistently stayed in the 14 to 17 trillion won range.

Local analysts had expected 13.4 trillion won in operating profit for the fourth quarter and 63.2 trillion won in revenue, according to the stock information provider FnGuide.

Samsung did not reveal performance figures for different business divisions, but the company cited “slow demand” in semiconductors as a major factor in a public announcement the same day. The IT giant has three major business divisions: chips, smartphones and home electronics.

Before starting to slow, semiconductors were the main contributors to Samsung’s high performance over the last two years.

In the announcement, the company added that demand from data center clients in the fourth quarter had fallen short of expectations.

“Shipping of memory chips retreated from the third quarter, and the price decline turned out to be bigger than what we expected earlier this year,” it said.

One reason is because companies with data centers such as Amazon, Facebook and Microsoft bought large amounts of dynamic random-access memory (DRAM) chips during the last two years, which are now piling up.

DRAM prices started to fall after more than a year of increases - another factor that is affecting demand as companies anticipate more price cuts.

Slow growth in smartphone sales and one-off expenses including the company’s offering of incentives to staff at the year’s end also affected the profit level.

Worries that the semiconductor supercycle was ending have surfaced for years, but Samsung and other chipmakers have reported strong earnings - until the fourth quarter.

December’s chip exports from Korea retreated for the first time in 27 months. The general consensus among local analysts is that Samsung’s revenue will continue to shrink in the first half of this year.

But they have a more positive outlook for the second half.

“Memory chip prices will bounce back in the second half of 2019,” said analyst Lee Jae-yun of Yuanta Securities. “Because the supply growth rate of major chipmakers in 2019 will be 19 percent [year on year], whereas demand growth is expected to reach 20 percent.”