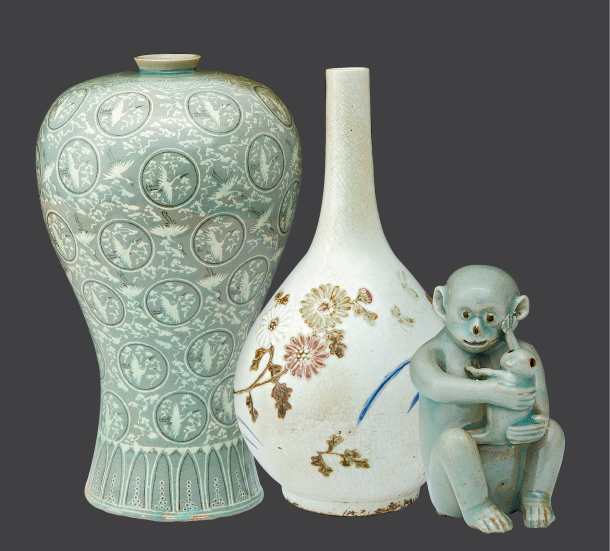 Several National Treasures are on display at the “A Collection for Korea” exhibition, including, from left, “Celadon Prunus Vase with Inlaid Cloud and Crane Design” (No. 68); “Blue-And-White Porcelain Bottle with Chrysanthemum Design in Underglaze Iron and Copper” (No. 294); and “Celadon Water Dropper in the Shape of Mother Monkey with Baby” (No. 270). [KANSONG ART AND CULTURE FOUNDATION]

On Nov. 22, 1936, an auctioneer announced the opening bid for a beautiful white porcelain vase at the Gyeongseong Art Club, an auction house that acted as a legal outlet for transferring Korean cultural artifacts during the Japanese colonial era (1910-45).

When the bid reached 8,000 won, the bidders gave up, leaving only Korean collector Chun Hyeong-pil (1906-62), whose pen name was Kansong, and the famous Japanese antique art dealer Yamanaka & Company to compete. (Because the auction house did not allow Korean nationals to participate in auctions, Chun usually used his trusted Japanese proxy Shinbo Kijo to participate in the auction on his behalf.)

“Nine thousand won!” The silence was broken by the Yamanaka & Company.

The auction was a fierce battle between the two, and finally, at 14,580 won, breaking the record for highest price paid at a Korean auction, Chun was finally able to get a hold of the “Blue-and-White Porcelain Bottle with Chrysanthemum Design in Underglaze Iron and Copper,” which is now National Treasure No. 294.

While 14,580 won today could only buy you a decent meal, it was enough to purchase about 15 houses at the time. Chun was determined to not lose the valuable Korean craftwork to Japan.

Chun was a legendary collector who is known to have dedicated his life and fortune to buying and preserving the country’s treasures during the Japanese colonization of Korea so that the artifacts didn’t get in the hands of the Japanese and end up outside of their homeland. In the spirit of preserving Korea’s history, the Kansong Art and Culture Foundation has organized a special exhibition to commemorate the 100th anniversary of the March 1st Independence Movement titled “A Collection for Korea.” 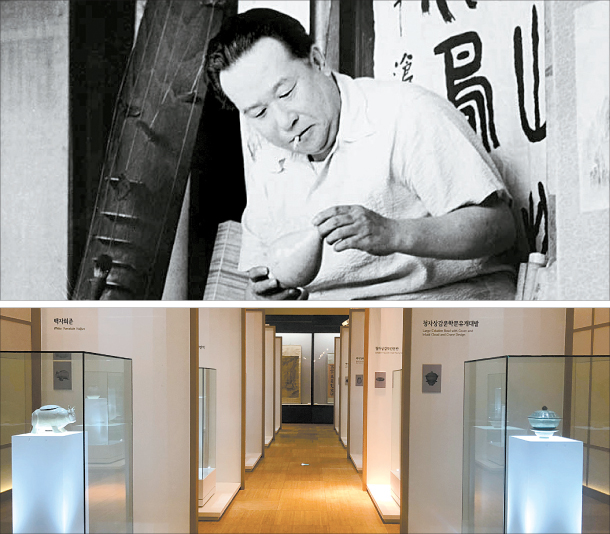 From top: A photograph of Kansong Chun Hyeong-pil (1906-62); The second section of Kansong Art and Culture Foundation’s latest exhibition titled “A Collection for Korea” at the Dongdaemun Design Plaza in eastern Seoul KANSONG ART AND CULTURE FOUNDATION]

“Kansong Chun Hyeong-pil did not directly participate in the independence movement as an activist,” said Chun In-keon, CEO of the Kansong Art and Culture Foundation, “but we want to honor him as a cultural independence activist as he dedicated his life to protect his country’s cultural artifacts.” The exhibit, which opened at the Dongdaemun Design Plaza (DDP) in central Seoul on Jan. 4, runs until March 31. It displays some 60 artifacts including six National Treasures, as well as many valuable crafts that Chun was able to purchase and collect during the Japanese colonial era. The exhibit attempts to help visitors understand how Chun and other independent activists devoted their lives to their country.

“To keep the exhibit interesting, we focused on ‘history-telling,’” said Han Man-ho, the curator of the exhibit. “That is why we dedicated a large part of the first section to focusing on the history of Posung School, which played a central role in the March 1st Independence Movement.”

In 1905, Lee Yong-yik (1854-1907), a high ranking officer of the late Joseon Dynasty and the Korean Empire, founded Posung Elementary School, Posung College and Posungsa, an in-school printing house. The following year, he founded Posung Middle School to complete the plan of building a complete school system. The exhibit tells the story of how Posung’s history is directly connected to the history of the Korean independence movements. For example, the chairman of the school foundation, Son Byung-hee, and the headmaster, Choi Lin, were both leaders of the March 1st Movement and part of the 33 national representatives of the movement.

The in-school printing house Posungsa printed every copy of the “Declaration of the Independence” that was distributed during the independence movement as well. Thanks to Chun, who established the Dong Sung Educational Foundation and took over operations of the Posung schools in 1940, students at Posung could continue their education during difficult times like the Korean War (1950-53). 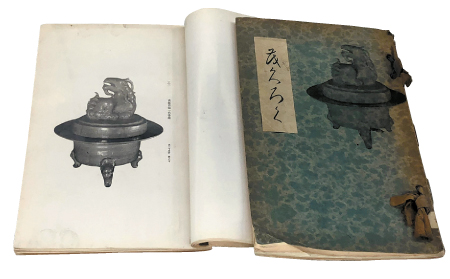 “The great effort of Posung at the core of the March 1st Movement still remains in the heart of Posung graduates and students,” said Han.

In the following section, visitors can witness valuable artifacts that could have been taken away by foreign powers if it weren’t for Chun’s determination at the auction houses. Black and white auction house catalogues are on display as well as pieces from Chun’s collections, including the “Blue-and-White Porcelain Bottle with Chrysanthemum Design in Underglaze Iron and Copper” (National Treasure No. 294); “White Porcelain Huijun,” which is a bull-shaped jar used to store liquor; “White Porcelain House-shaped Water Dropper with Landscape Design in Underglaze Iron,” which Chun won at auction for 880 won at the Gyeongseong Art Club, among others.

In the final section, visitors can enjoy the John Gadsby Collection, which displays 12 Goryeo celadons among 20 pieces that Chun acquired from a British lawyer named John Gadsby who practiced law in Japan for decades. According to Han, Gadsby’s collection was well known for its quality and artistic value. Because his collection was desired by many collectors, it is said that Chun had to sell his family farmlands in Gongju, South Chungcheong to come up with the money to purchase all 20 pieces in Gadsby’s collection.

“A Collection for Korea” is Kansong Art and Culture Foundation’s final exhibition at the DDP. The organization began holding exhibitions at the design center in 2014 to bring cultural artifacts closer to the public. After the exhibition, the foundation plans to resume its usual spring and fall exhibitions at the Kansong Art Museum, also known as Bohwagak, in Seongbuk District, central Seoul.

To look back at five years of Kansong exhibitions at the DDP, the foundation has also organized a digital art exhibition at the beginning of “A Collection for Korea” so visitors who haven’t been to the previous exhibitions held at the DDP can get a glimpse of what works were on display through digital screens. This section of the exhibition can be accessed for free, while tickets for “A Collection for Korea” exhibit costs 10,000 won ($8.90). For more information about the exhibit, call (02) 2153-0339 or visit www.kansong.org.