Hyundai puts holograms on road to help with navigation

Hyundai puts holograms on road to help with navigation 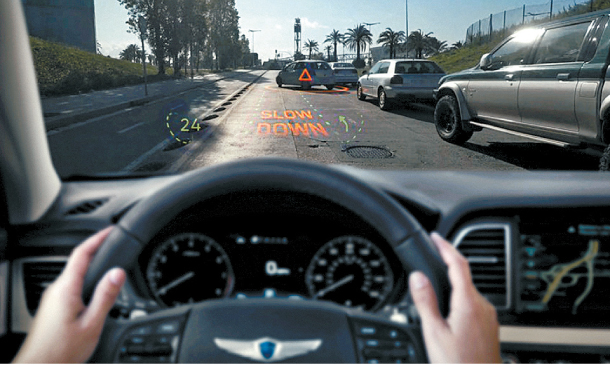 Hyundai’s holographic AR navigation system, unveiled Tuesday at the Consumer Electronics Show (CES), shows navigation information to drivers that appear to be on the actual road. The system was developed in collaboration with AR tech start-up WayRay. [HYUNDAI MOTOR GROUP]

Hyundai Motor Group unveiled a holographic AR navigation system, the first of its kind, in collaboration with start-up WayRay at the Consumer Electronics Show (CES) in Las Vegas on Tuesday.

Hyundai partnered with the Switzerland-based start-up that specializes in AR technology and demonstrated the navigation system on the group’s luxury sedan, the Genesis G80.

While conventional head-up displays (HUD) project a reflected image through a liquid-crystal display screen installed on the dashboard, the new holographic AR system displays what appear to be 3-D images on the road through the windshield and automatically adjusts the displayed information to the driver’s viewing angle.

The AR navigation system, demonstrated at WayRay’s CES booth, also takes up considerably more real estate compared to existing HUDs, typically relegated to a small corner of the windshield, and displays a variety of driving information that includes navigational features and safety warnings.

Information such as lane guidance, destination points and the current speed is shown along with advanced driver-assistance system features including lane departure warnings and forward collision warnings.

Hyundai said an image size of 3.15 meters (10.33 feet) by 1.31 meters will be visible from the driver’s perspective, despite the actual projected image being just 310 millimeters (12.2 inches) by 130 millimeters. The company’s existing HUD was changed to incorporate WayRay’s system.

Hyundai promised that the technology will bring changes to the conventional concept of a windshield.

Hyundai said that the two companies will continue to cooperate to expand the technology to display information that identifies objects on the road such as buses and crosswalks.

The two companies also plan to incorporate real-time data such as traffic signals, surrounding vehicle information and road or weather conditions into the technology.

Hyundai has worked on holographic technology since 2017 and invested in WayRay last September.