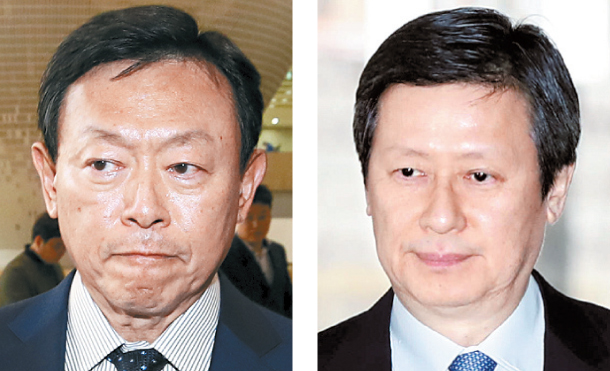 The two Lotte Group brothers have been estranged since 2014, and their feud seems likely to continue this year as older brother Shin Dong-joo’s attempt to make peace was rebuffed on Tuesday.

The letter included suggestions to end the family feud and cut off the Korean Lotte Group’s investor ties to the conglomerate’s Japanese unit.

Lotte Holdings, or Lotte’s Japanese headquarters, is a major stakeholder in Lotte Hotel, which owns large proportions of shares across various local affiliates. The structure is rooted in the conglomerate’s history as founder Shin Kyuk-ho first launched the business in Japan and later in Korea.

Shin Dong-bin, who runs the Korean unit, has been making efforts to cut off investor ties between affiliates in these two countries with the aim of rearranging the company so that local affiliates can be controlled by a holding company in Korea rather than Japan.

In the letter, the older Shin said that he intends to “spin off Lotte’s Korean unit to be under Chairman Shin’s wing and create a corporate structure in which Lottes of Korea and Japan do not interfere with each other.” This would offer more stability to staff from both sides by eliminating the possibility of conflict, he said.

The elder Shin added an emotional touch, saying that “bringing business stability through reconciliation would be the best way to serve our father.”

He has written several other letters in the past, and also attempted to visit his brother in prison last year.

Shin Dong-joo’s actions are interpreted as more than just brotherly reconciliation, however. The move is more likely to be an attempt to regain power at his father’s company, something Shin Dong-joo has been trying to do since he was ousted five years ago. The elder Shin was fired as Lotte Holdings vice chairman position in late 2014. He has repeatedly attempted to return to an executive position - including while his younger brother was in jail - but failed due to insufficient votes from stakeholders.

Lotte Group, the de facto holding company of Lotte’s Korean businesses, released a statement on Tuesday afternoon saying that they do not believe the older Shin’s request for reconciliation comes with the best intentions.

“The press release seems more like an effort to make the reconciliation effort an occasion of promotion,” the company said.

According to the statement, Shin did visit his brother in prison but was accompanied by a team of seven to eight people that “looked like PR specialists and lawyers” and gave a press event that same day criticizing his brother and Lotte.

“Based on what he says, Shin [Dong-joo] seems to be confused in telling the difference between a company that can be controlled by an individual and one controlled by legal procedures,” said the statement.

“Such big decisions cannot be made by specific individuals but should go through a proper, legal procedure that involves the board of directors and stakeholders.