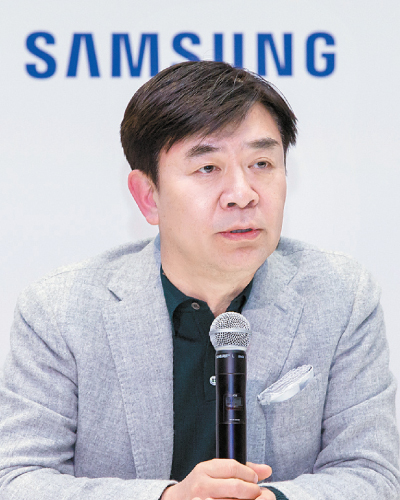 Samsung robots are coming this year.

Kim Hyun-suk, president and head of Samsung Electronics’ consumer electronics division, said the company has been conducting research on the robotics market and is now preparing to launch several robots this year during a press conference with reporters on Monday, a day prior to the opening of the Consumer Electronics Show (CES) in Las Vegas.

Until now, Samsung Electronics has stayed mum on whether it is making robots.

“To develop robots, it’s important to have an artificial intelligence [AI] platform ready [to mount on the robots],” Kim said. “That AI platform is almost ready.”

Samsung unveiled three variations of its AI-based robot, dubbed Samsung Bot, at the briefing, revealing its robotics technology for the first time.

The three Samsung Bots, labeled Care, Air and Retail, are designed to aid people’s health, and improve air quality and retail shop management. Samsung Bot Care, for instance, monitors users’ vitals like blood pressure and heartbeat and helps people take medicine at the right time. The robot can also call 119 and contact family members when it senses an emergency such as a heart attack.

The electronics giant also introduced its wearable robot, dubbed GEMS. It assists people with difficulty walking due to weak muscles or injuries and reduces physical pain in the knees and ankles. 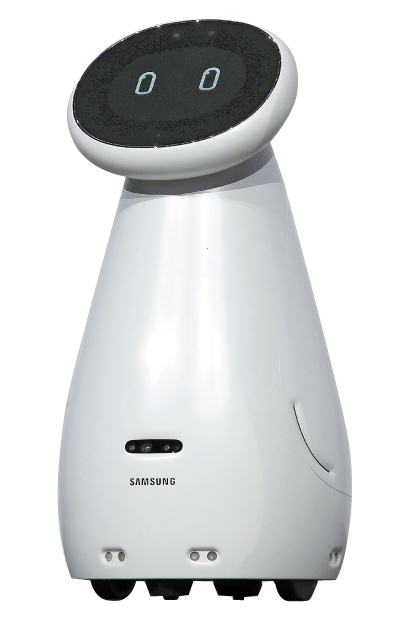 Kim added that demand for robots is expected to increase, especially due to societal aging, pointing out that robots like Samsung Bot Care will be useful for the elderly.

“By exploiting Samsung’s know-how in AI, Internet of Things and developing multiple devices, we are considering our options for various types of robots,” Kim said.

On concerns of whether Samsung’s own AI engine Bixby is losing ground due to the company’s AI partnerships with tech giants like Google and Amazon, Kim said that is a “misunderstanding.”

Though Amazon’s Alexa AI assistant and Google Assistant may be a step ahead of Bixby in terms of technology and presence in the global market, Kim said partnerships make Bixby stronger, not weaker.

The important thing, according to Kim, is that when people ask Bixby a question, the AI will be able to give out answers based on its own knowledge or by utilizing data from Google or Amazon.

“No company has strengths in every aspect of business,” Kim said. “Though Bixby is a latecomer [to the AI assistant market], Samsung has relative strength in making devices compared to other tech companies, and Google and Amazon will focus on what they are good at.”

Kim also commented on LG Electronics’ rollable TV that made headlines globally. LG’s rollable TV prototype can roll itself into a storage box that becomes a table with speakers.

According to the Samsung president, there needs to be considerations on whether the product can be “economical.” He added that without the economic feasibility to commercialize the product, the prototype is a lot less meaningful.

On concerns about the product’s cost, Kwon said while the price may be a barrier in widely expanding sales of the product right after launch, the company will strive to quickly improve the TV’s cost competitiveness.