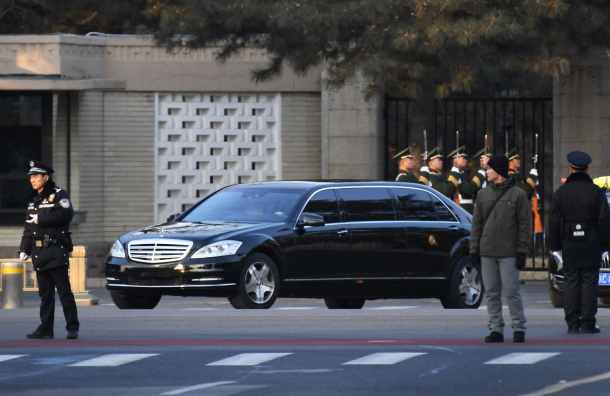 A lead limousine in the motorcade of North Korean leader Kim Jong-un leaves the gate of the Diaoyutai State Guesthouse in Beijing on Wednesday. Kim arrived on Tuesday in Beijing for talks with Chinese President Xi Jinping, as preparations ramp up for an expected second summit with U.S. President Donald Trump. [AFP/YONHAP]

North Korean leader Kim Jong-un met with Chinese President Xi Jinping for a second consecutive day and toured a pharmaceutical plant in Beijing on Wednesday before leaving the city later that afternoon.

Kim’s fourth trip to China within the past 10 months came at a critical point ahead of a possible second summit with U.S. President Donald Trump and set the tone for the North Korean leader’s 2019 diplomatic overtures.

Around 8:50 a.m. Wednesday morning, Kim left the Diaoyutai State Guesthouse, his lodgings during his Beijing visit, and visited industrial facilities at an economic and technological development zone in Yizhuang.

Kim later met with Xi for a second consecutive day, having a luncheon around noon at the five-star Beijing Hotel, which has a long history of hosting important receptions, near Tiananmen Square and the Forbidden City.

Kim and his entourage departed from Beijing Railway Station on his special armored train later a little after 2 p.m. Wednesday, following the luncheon.

Members of the Chinese Communist Party’s Politburo were spotted seeing Kim off at the train station, an indication of respect.

It takes up to 14 hours to get back to Pyongyang from Beijing by railway. If it did not make stops at any other cities, the train was expected to arrive in Pyongyang early Thursday morning.

The schedule and route this time was similar to Kim’s first trip to Beijing by train last March.

Accompanied by his wife Ri Sol-ju, younger sister Kim Yo-jong and a slew of foreign affairs and security aides, Kim departed from Pyongyang on Monday for a four-day trip to China on his special armored train, arriving in Beijing Tuesday morning.

Kim and Xi held an hour-long meeting Tuesday afternoon in the Great Hall of the People, an opportunity to discuss the Korean Peninsula denuclearization issue and reinforce traditional bilateral relations as the countries mark the 70th anniversary of establishing diplomatic ties this year.

Details of what Kim and Xi discussed have yet to be revealed, but their summit is seen as an opportunity to strategize ahead of a second North Korea-U.S. summit meant to move along denuclearization negotiations.

In a show of unity, Chinese and North Korean state media reported Tuesday morning Kim’s visit to China, hours before he arrived in Beijing. This was a departure as the movements of the North Korean leader are usually reported after his trip is over and he has returned home safely. That is seen by observers as an attempt by Pyongyang to be accepted as a normal state by the international community.

The Chinese Foreign Ministry said on Kim’s visit that the two countries are committed to deepening bilateral relations, properly resolving the Korean Peninsula issue, and maintaining peace and stability on the region.

On whether Kim’s Beijing visit was related to a second North Korea-U.S. summit, Lu Kang, spokesman of the Chinese Foreign Ministry, said in a briefing Tuesday, “China maintains that it is very useful for the DPRK and the U.S. as key parties to the Korean Peninsula nuclear issue to maintain contacts.”

Lu continued, “China supports the two sides in continuing with their dialogue and striving for positive outcomes.”

Kim’s visit overlapped with a U.S. delegation led by U.S. Trade Representative Robert Lighthizer, which held talks in Beijing since Monday amid a 90-day truce in the U.S.-China trade war. The U.S.-China negotiations were extended another day to Wednesday.

The timing of Kim’s visit and the U.S.-China trade talks could have been interpreted as a move by Beijing to pressure the Trump administration to reach a trade deal soon. But spokesman Lu said, “These two visits are two different things.”

Trump had yet to respond to Kim Jong-un’s China trip but tweeted Tuesday: “Talks with China are going very well!”

Kim has often sought meetings with China ahead of making key decisions, including ahead of his first summit with Trump, in late March and May, then once more a week after the June 12 Singapore summit.

Trump, in turn, has sometimes blamed China for impeding denuclearization talks with North Korea. Other times, he has praised China’s efforts as interlocutor.

In a New Year’s address, Kim pledged his commitment to complete denuclearization in a message to Washington and expressed his desire to meet again with Trump - a sentiment immediately reciprocated by the U.S. president over Twitter.

But Kim also warned that if the United States continues to impose sanctions and put pressure on North Korea, it may have to “find a new way” of achieving peace and stability of the Korean Peninsula.”

He did not elaborate what such an alternative path could be. Kim also said in the speech that there is a need to promote “multi-party negotiations” in bringing about a peace mechanism to formally end the 1950-53 Korean War, which ended with an armistice agreement. This indicated a possible expanded role for Beijing in the upcoming denuclearization negotiation process. China is a signatory to the 1953 armistice.

“China has been an important force in promoting the political settlement of the Korean Peninsula nuclear issue and peace and stability on the peninsula,” said Lu.

He harkened back to Beijing’s efforts in the currently defunct six-party talks. “China will continue to work with all relevant parties to jointly move forward this process,” said Lu. “If China must be described as a factor in this whole process, then China is, and will always be, a positive factor.”

The high-level meeting was supposed to happen in early November in New York but was postponed on the request of Pyongyang.

South Korean Ambassador to the United States Cho Yoon-je told reporters in Washington Tuesday that “back-channel talks” are taking place between Pyongyang and Washington, adding that “because of the resoluteness of President Donald Trump and Chairman Kim Jong-un, we may be able to look forward to preparatory talks for a North-U.S. summit in the near future.”

Trump on Sunday said that a location for the second North-U.S. summit will be announced in the near future. CNN reported Tuesday that Bangkok, Hanoi and Hawaii have been visited by White House scouting teams, citing a source familiar with the planning process.

Multiple diplomatic sources have said that the Vietnamese government has said it desires to host the second North-U.S. summit.