Dobong to get new K-pop arena

Dobong to get new K-pop arena 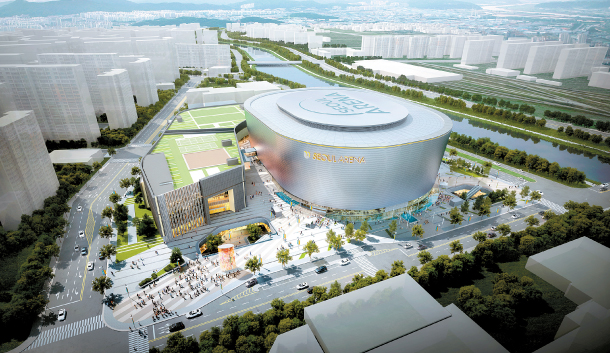 An artist’s rendition of a concert arena the Seoul city government plans to build near Chang-dong Station in northern Seoul by 2024. It is aimed at providing a better-equipped indoor venue for concerts by K-pop and foreign artists. [SEOUL METROPOLITAN GOVERNMENT]

Seoul is getting a K-pop concert hall built by the city.

The Seoul city government on Wednesday announced a plan to build a live concert arena in northern Seoul by 2024. It aims to provide a better-equipped indoor venue for concerts by K-pop and foreign artists.

Seoul Arena, which will seat around 18,400 people, will be built near Chang-dong Station in Dobong District, northern Seoul.

“Seoul is the only city among some 10 megacities throughout the world to not have an arena dedicated to large-sized live concerts,” the Seoul Metropolitan Government said in a statement on Wednesday.

The city government defined an arena as a 10,000 to 20,000-seat indoor hall that is fit for music concerts and performances where the stage is located at the center of the hall and seats surround the stage in spirals.

Most of the live concerts in Seoul are held at sporting facilities, and the city government wants to change that.

“Today, live concerts have to be held at sports facilities mostly, like the World Cup Stadium and the Olympic Stadium, both of which can seat some 60,000 people but are open-air stadiums,” the city government said. “Concerts have been held indoors at the Olympic Gymnastics Arena, which can seat some 15,000 people, and the Gocheok Sky Dome baseball stadium that has some 15,000 seats.

“But these facilities’ function is mostly for sports, not music concerts,” it said. “Concerts have been canceled before because of clashing schedules with sporting events.”

Cost is another factor.

“Sporting facilities aren’t equipped with sound systems, and installing them and taking them apart every time a concert is held is a lot of money,” the city government said. “The Seoul Arena is going to be an indoor space equipped with top-notch sound systems to counter this problem.”

The arena is part of the city government’s plan to develop the neighborhood in northern Seoul into a Hallyu (Korean wave) mecca.

In addition to the arena, the city government plans to build in Chang-dong a smaller 2,000-seat concert hall, a theater that will focus on showing more independent films and documentaries and a museum on the history of K-pop and music in Korea.

“They are part of the plan to turn the Chang-dong area into a hub of cultural and commercial activities,” the city government said. “Hopefully, that will also help balance out the state of development across the city.”

The city government in 2016 built a cultural hub called Platform Changdong 61 near Chang-dong Station. A facility made with shipping containers, like London’s Boxpark, it hosts various small-sized concerts, performances, cooking classes and exhibits. The plan to build the arena in this area has been criticized for its location and accessibility as tourist traffic is heavier in the central and southern areas of Seoul. But the city government on Wednesday appeared ready to go through with the plan, saying that it will be economically feasible.

“The plan has been verified as feasible by the Korea Development Institute,” the city government said. “All 528.4 billion won [$471.9 million] going into building Seoul Arena and additional facilities around it will be financed by private investment.

“Once the facilities are completed, the city government will own them, but private companies will manage them for the next 30 years,” it said. “It’s a plan that we have been working on since 2015.”

A similar plan to build a K-pop arena was once considered by the Park Geun-hye administration in 2013. It intended to build one in Goyang, Gyeonggi, by 2016. The plan was to use public funds to build the arena in the city, but it fell through after it was deemed unprofitable and was not included in the government budget.