Photographer gets 30 months in studio case

Photographer gets 30 months in studio case 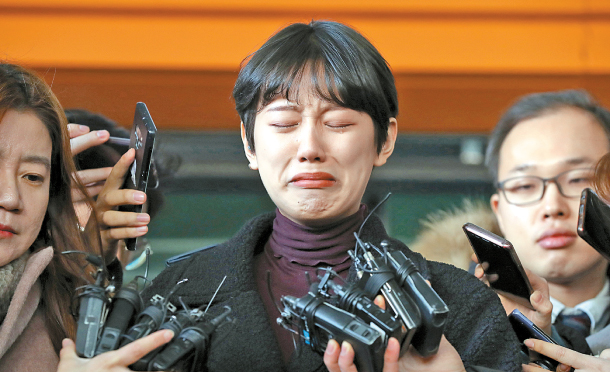 YouTuber Yang Ye-won in tears as she speaks to reporters on Wednesday at the Seoul Western District Court, recounting how she was coerced to take nude photos. A photographer surnamed Choi was sentenced by the court to 30 months in prison Wednesday for molesting Yang and distributing her photos on the internet. [YONHAP]

The Seoul Western District Court on Wednesday found a man surnamed Choi guilty of molesting and illegally distributing photos of YouTuber Yang Ye-won through the internet.

Choi was sentenced to 30 months in prison and 80 hours of mandatory sex education. He is also prohibited from working with minors for five years after he is released from prison.

“Even though Yang changed her testimony during trial, we cannot hold that against her credibility,” said Lee Jin-yong, the judge in charge of her case. “There is no reason for the victim to falsify her testimonies according to the evidence presented.”

The case first dates back to May of 2018, when Yang revealed in a video she posted on YouTube that she was sexually molested and coerced into performing lewd photo shoots three years ago at a studio in Mapo District, western Seoul. Yang then went on to sue the owner of the studio, surnamed Jeong, who she accused of arranging the photo shoot and coercing Yang to take nude photos. Jeong leapt to his death under the pressure from a police investigation.

Choi is a colleague of Jeong, and was identified by the police as the first person who illegally shared about 115 photos of Yang on pornographic websites. Choi was also present during Yang’s photo shoots.

The judge went on to explain that “Yang had explicitly detailed her sexual molestation experience [by Choi]. There is no part of her testimony that is illogical or contradictory, which is why we believe that she was molested by Choi.”

Choi said at the trial that Yang agreed to the photo shoots, but the court said that the evidence proved otherwise.

After her trial, Yang expressed her relief about the ruling to the press.

“I want to thank my family who told me that everything was going to be okay, my mother who thanked me for being alive and my boyfriend who stood by my side through all this,” said Yang in front of the reporters. Yang went on to thank her supporters who believed in her and rooted for her throughout the whole legal process.

Yang also addressed her detractors, and said that she was going to take legal actions against anyone who posted untrue comments against her online.

“I will seek [legal actions] against each and every person who hid behind their computers and phones to harass me,” Yang said.

Yang went on to say that she was willing to invest herself in the legal process if Choi were to appeal to a higher court.

“I know that this won’t be the end, but I am thankful that the court viewed my claims as true,” she said. Choi has denied all allegations made against him, but has not yet revealed if he will appeal to a higher court.